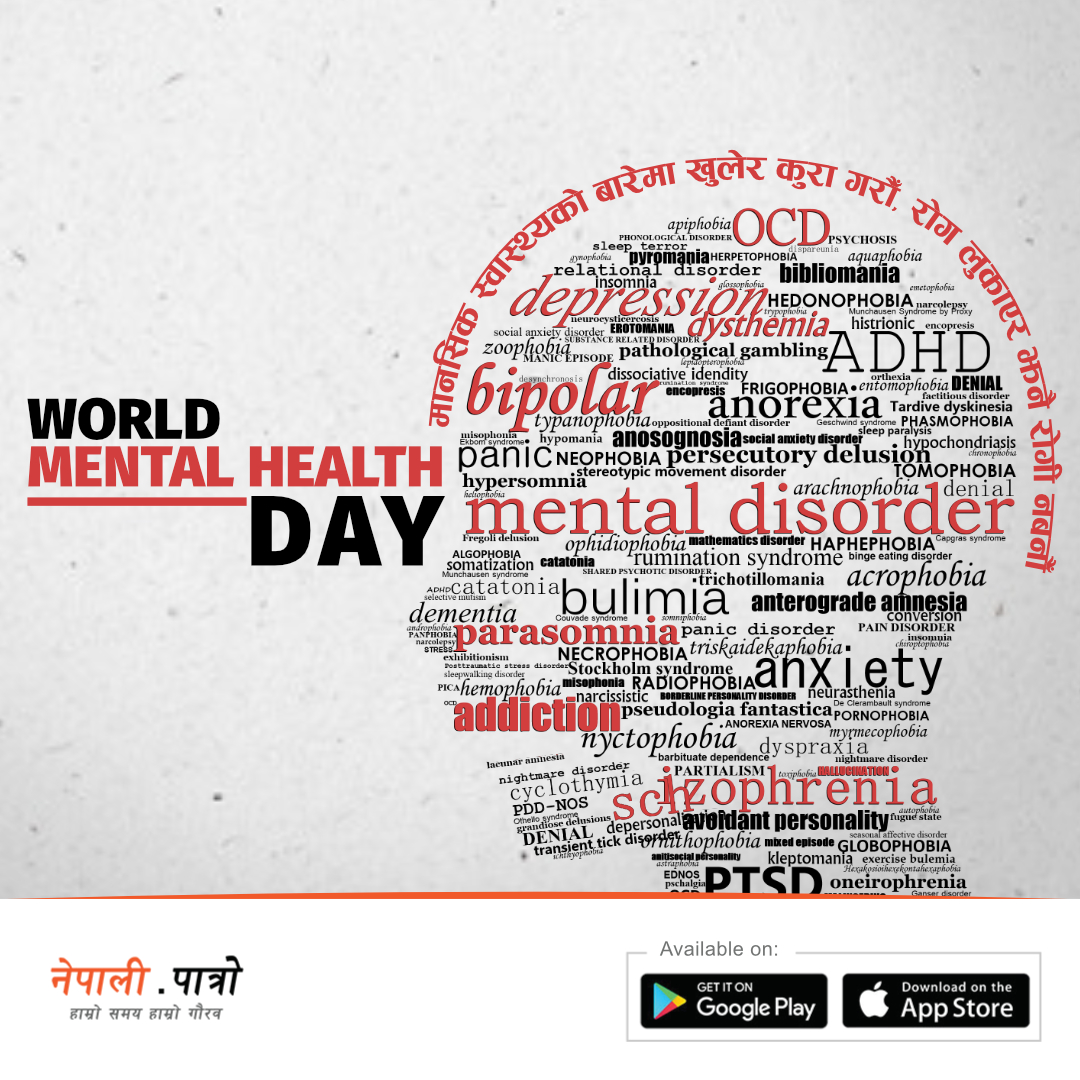 Physical health is treated with physicians whereas Mental Health needs a bit different approach and it is treated with licensed Neurologists or Physiatrists. But one should always remember that Mental Health is not dangerous as it is generally portrayed. One always needs to remember that it is also a disease that is treatable as other health problems. 10th of October is the day celebrated since the year 1992 as World Mental Health Day. World Mental Health Day was first celebrated on the 10th of October 1992 by the initiative taken by Deputy Secretary, General Richard Hunder from the World Federation of Mental Health. It was also supported by its members and contacts spreading in more than 150 countries worldwide. Nowadays, this day is celebrated worldwide to bring awareness and attention to Mental Health as well as to advocate against the social stigma attached to it. The World Health Organization (WHO) too supports this day by raising awareness on the Mental Health Issue. It uses its strong relationships with other health and civil society across the globe for the development of technical as well as communication materials on this issue.

MENTAL HEALTH, WHAT IS IT?

Mental health is a state of a person who is self-reliant. The person leads a productive, satisfying, and happy normal life as anyone on this planet. Whereas, recent studies are showing that one out of every five young people across the globe is suffering from some kind of mental problem.

The first pioneer of Mental Health was William Sweister from the United States. He was the one who expressed his first positive interest in Mental health during the mid-1900. Famous mental health founder Isaac Ray as well as the fourth president of the American Mental Health Association Dorothy Dix are considered as the first to talk about mental issues in a positive sense and advocate for the welfare of the people in general.

WHAT CAUSE MENTAL HEALTH PROBLEMS

Mental Health Problems can arise due to various issues. The fall from a height or an accident leading to the cerebral parts in the brain is a normal cause that causes Mental Health Problems. But as the lifestyle has been changing worldwide and it is bringing some good and with it some negative effects as well.

Teenagers start to use alcohol, smoking, and/or other drugs at an early age, and because of the addiction to such habits, they, later on, can develop mental problems. Various studies have shown that teenagers in South Asia are the ones who start using addictive substances at an early age. Recent data shows that there is 14 to 15% of Nepalese adolescents between the age of 13 to 17 plan or attempting suicide. Which is due to the mental health issues that they are facing. Some points to be taken into consideration as causes of Mental Illness are:-

In fact, almost half of the world’s population is affected by mental problems in the daily activities, relationships, and activities of daily lifestyle.

HOW CAN MENTAL PROBLEMS BE PREVENTED:

If somebody is suffering from Mental Health Problems, the first to come in contact and nearest to help them are the family members, friends, or school. Family members, friends, and the school can play a very big role in the treatment of the mentally sick or the ill. Because they are the one who is close to them. They can closely know and monitor the habits, behavior, and manners of the suspected members. And, if any member or a person feels inactive, lonely, abused, etc they should contact the nearest health personnel or health institution as soon as possible.

Developing as well as underdeveloped countries should impose strict laws that ban the sale and consumption of tobacco products. As well as its related products, such as intoxicants and other products of narcotics.

Family members should always have a close look at the behavioral changes of teenagers.  And they should immediately contact the nearest health facility as soon as they feel that one has developed abnormal habits, activities, or behaviors.

The signs and symptoms of mental illness are never to be hidden when shown in a health institution, or to the concerned person. The mental problems should never be hidden and it should be cured with the help of the Neurologists, or Psychiatrist before it reaches a critical stage. Mental health is very important as Physical health is therefore when a problem is seen, it should be treated without hiding it. Hiding a mental problem and illness can be expensive in monetary terms but harder and difficult is to see a family member suffer from those illnesses.

The treatment of mental illness requires a lot of support from family members, friends, and relatives as well. It needs to be supervised closely for the total elimination of the illness.

At the same time, one must adopt a positive and healthy lifestyle to eliminate mental problems and illness and adopt a self-reliant lifestyle as well. Reduction of alcohol and other intoxicants to zero. Getting adequate sleep of at least eight hours daily. Morning walks and sports-related activities also help a lot in the treatment of the mentally ill and people with mental problems.

In fact, Mental health problems are considered more common than cancer, diabetes, or heart disease. Thus we all need to live a healthy life, free from worries and overthinking, etc. Thus, whenever there is a suspicion of mental problems or illnesses, public awareness should be raised to get one to the health institution as soon as possible.

This act of immediate awareness along with support, love, and affection of friends and family supports the ill person. Therefore, in our country too, this World Mental Health Day should be celebrated at the community level. It should be observed with grand participation including public awareness.

In Nepal, this day is observed by organizing talks and seminars, etc in the health sectors about mental health awareness. A march with public figures, doctors, and health educators is also organized to raise awareness and eliminate the biases that still exist in our society. But still, the tendency to hide mental illness is very common, especially in our society. Therefore, the greatest message that can be given today on this occasion of World Mental Health Day is the broadening of knowledge regarding mental problems and illness is one of the important messages that can be given on this day.

On the occasion of this World Mental Health Day, we would like to wish all Nepali Patro users a long life, mentally and physically. To Read this article in the Nepali Language please click here.

Sources: For public information from various newspapers and websites.