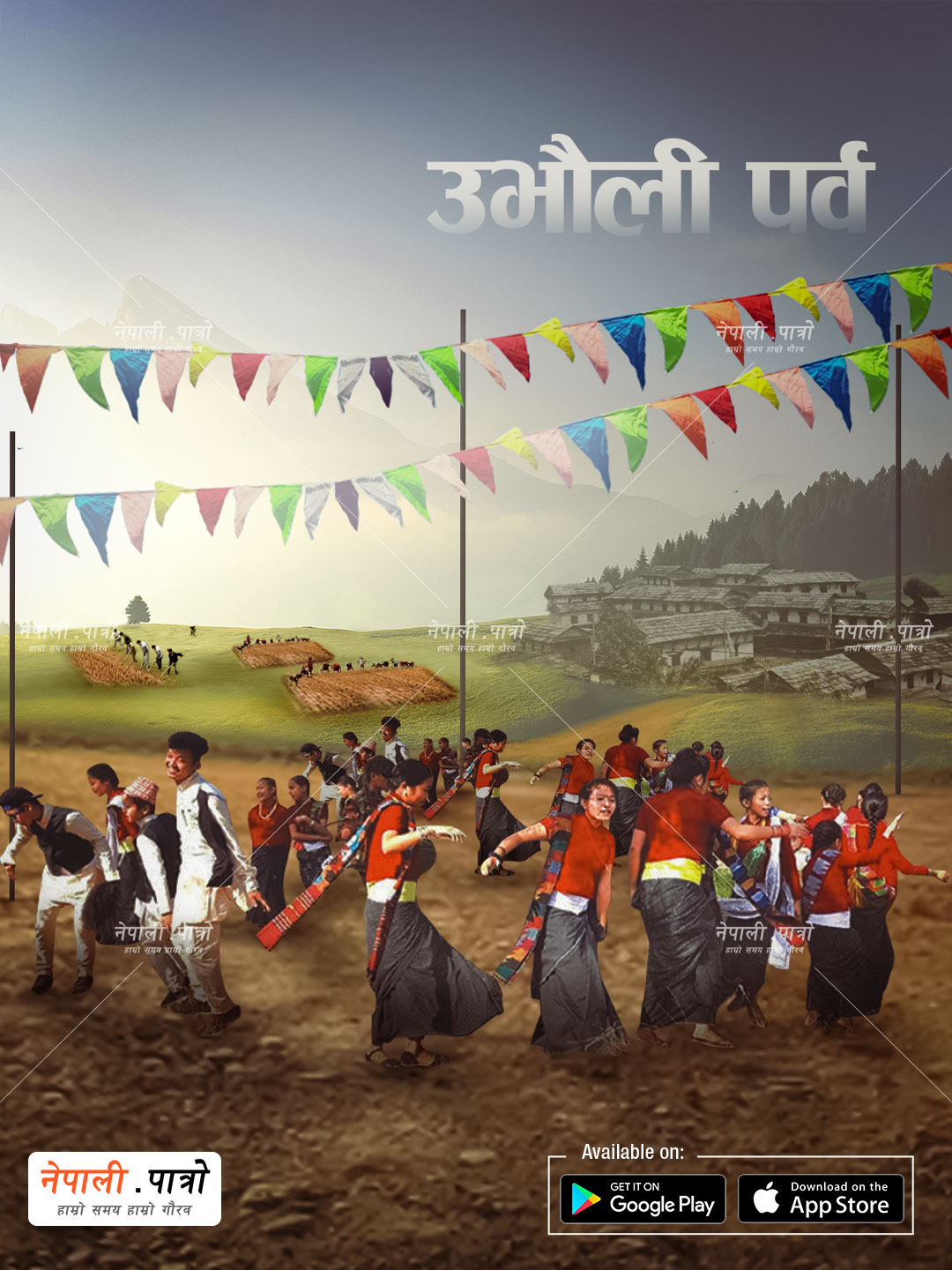 Celebrated by the Kirant community, this festival is one of the festivals that has been celebrated since the beginning of the “Agricultural Age” on earth. And, on the first day of this festival, it is customary to dance “Chandi Dance”, which is a way of worshipping and adorning nature.

On the first day of this festival “Chandi Dance” is performed, this day is also known as “Chandi Purnima”, and it falls on “Buddha Purnima” in the month of Baishakh. However, no exact evidence has been found till day as to from when or which date the Kirant community started celebrating this festival.

The Kirant community also considers this day as “Sumnima,” meaning the day of creation of Goddess Parbati/Parvati, because of this reason Ubhauli festival is very important from the cultural point of view also. Chamling, Bantawa, Sunuwar, Rai, Yakkha, Limbu, and other castes within the Kirant community celebrate this auspicious festival as one of the great festivals.

Ubhauli festival is called and recognized by different castes of the Kirant community by different names depending on the place and the language they speak.

Ubhauli festival is found to be addressed by different castes of Kirant community with different names, the Limbu community calls it “Chasok” or “Yakwa Tangnam”, the Rai and Chamling call it “Sakela”, the Sunuwars calls it as “Folshyadar” or “Shyadarpidar,” the Bantawa calls it as “Sakewa” or “Sakenwa”, and the Dumi calls it as “Tosi” or “Tosu”. Similarly, this festival is also called “Yuchang” by the Yakhas and “Bhumya” by the Thami people.

Habitat of Kirants in Nepal

Kirants are and have been living in different places in Nepal. Generally, Kirants are found to be living in Khotang, Bhojpur, Udaipur, Sankhuwasabha, Dhankuta, Solukhumbu, Okhaldhunga, Sunsari, Morang, Ilam, Panchthar, and other districts in the eastern part of Nepal.

Lately, they have been present in the capital of the country in places including Nakhipot, Jawalakhel, Baneshwor, and with different purposes, they are settled in other countries such as England, Hongkong, Singapore, America, India including other places as well. On the occasion of the Ubhauli festival, the Kiranti community living in the capital, Kathmandu, gathers and worships at “Sakela Than” in Hattiban, Lalitpur.

Similarly, Ubhauli festival is celebrated with great fervor even in the United Kingdom, Hong Kong, Singapore, United States of America, India, and other countries outside Nepal where Kirant communities are living.

Ubhauli festival activities and its relationship with nature

On the occasion of the Ubhauli festival, land worship has been an old tradition according to Kiranti tradition. This festival can be seen as a festival that is completely related to the weather and nature.

Towards the middle of Dakshinayan, during the month of Baisakh, as the summer months’ days get longer and warmer towards the colder parts of the country, the people from the hilly and mountainous areas start moving upwards towards highland along with their cattle and herds. This practice of coming down to lowland during the cold period and moving to highland when the weather gets warmer is still in practice at different places even these days.

In this way, the festival represents and reminds people, the way of life in the old or ancient days. When they used to migrate to lowland with the onset of the cold season and migrate to highland when the warmer season used to start. Thus, depending on the weather, the trend of moving down (Udho) or up (Ubho) is still in practice though in small numbers even today in some parts of Nepal.

As the heat increases towards the plains of Nepal, Terai, or Madhes, the weather also gets hotter in the upper hilly and mountainous areas. It is believed that birds, animals, insects, and even fish move towards the highland (Ubho) as the heat increases. And, for this reason, this festival celebrated by the Kirant community on the full moon of Baisakh is inspired by the word “Ubho” and is, therefore, known and celebrated as “Ubhauli”.

According to the Kiranti tradition, when Ubhauli starts then this time is considered to be the season of planting crops, as the heat of the sun warms the earth and the seedlings germinate faster after sowing them. And, it can also be seen that there is a tradition of bringing home the crops planted in Ubhauli during the season of Udhauli. Different castes of the Kirant community divide the year into two parts, namely Ubhauli and Udhauli.

Ubhauli Festival as the Nature Worship

The season used for planting crops is called Ubhauli by the Kirants, while the season of harvest when the crops are ready is called Udhauli. During both of these seasons, the Kirant community celebrates these festivals by worshiping nature.

The main purpose of worshiping during the festival of Ubhauli is to bring prosperity to all, as well as to have a good harvest of one’s own as well as others crops, i.e good harvest for all. They pray and worship so that there shall be no shortage of food anywhere in the whole world, along with peace – prosperity, etc for the whole wide world. Which includes good feelings, of no natural disaster or calamities to the entire population of the earth on which we live in.

In an agricultural country like ours, it is rare to find a person who denies that Nepal is not a rich country in terms of natural resources along with natural beauty. There is no doubt that for many years or even thousands of years, our ancestors have been handing over the knowledge, the task of how to live in harmony with nature in this world to every new generation.

All the rivers, canals, air, water, trees, insects, grasshoppers, animals, and birds, including the human beings living on this earth, are complementary to each other. These authentic rules of survival had been taught and handed down from the ancestors to the next generations. Kirant community worships every element in nature such as land, water, fire, sky, air, moon, sun, animals, and birds including plants as well.

The basic message of this worship is to live in harmony, with all these elements offering gratitude to them and always be grateful towards them. From these teachings, a very important message can be derived and that is “one should not live in isolation from nature but should live in harmony with it, Nature.”

Perhaps because of the fact that people in the present age seem to have lost much of their time in material pleasures, material splendors, or are tired of spending their life in a rush but getting nowhere concrete. Therefore, it is exemplary that though small in number people understanding the root causes and elements of the above-mentioned messages, are returning to the same old spiritual thoughts and nature.

The rule or law of naturalism passed on by the old generation is inspiring the new generation to be one with nature and has also given the important message that life will be meaningful if one can harmonize the rhythm of one’s life with nature.

On the first day of this festival Chamling, Sunuwar, Bantawa, Limbu, Yakkha, and other castes of the Kirant community, everyone cleans their house and its surrounding to make it pure. And, as the most important part of worship, they perform methodical puja and worship of the three stones stove (teen- chulho-dhunga) considered to be holiest by their ancestors since time immemorial.

Similarly, Bhumi (Earth) and Nag-Nagini (serpent kings and queens) are worshiped in Sakela Than, Bhumethan, etc., which had been established in the village, society, and block for a long time ago. If this kind of place (Than) does not exist then a branch of Katush (hazelnut) is established in the ground and considering it as a Than (religious place) worshipping of serpent gods and earth are performed.

The act of worship, puja is performed by the priest “Nagire-Dhami” and if such persons are not available, the worship is performed by a person who has the knowledge of the rules and regulations of this worship. On the occasion of this puja, various materials including chicken, pig, alcohol, home-brewed liquor, ginger, banana leaf, incense, akshata (white raw rice), flower, leafs, seuli, drum, zhyamta, bow, and arrow are required.

After the completion of this puja and offering, there is a tradition of performing a dance by all those present around the Than in the beats of traditional instruments, drums, zhyamta, etc., as well as the sound made by blowing the horn of the wild buffalo. In this way, after dancing at the place of worship on the first day, throughout the festival, people gather at different places to dance, sing and have fun as the celebration of Ubhauli festival.

On the occasion of Ubhauli festival, in dance performed at various places, people imitate animals, birds and perform their moves and gestures alike in the rhythm of Dhol or Zhyamta. In the same way, during this occasion, they also perform via dance the action of cultivating rice/paddy, taking care of them, harvesting and taking it to houses, etc. All the activities pertaining to agricultural activities are shown through the dance performance.

In addition, the dance known as ‘Sili Tipne’, depicts the work of spinning thread from cotton. It also shows the manner of weaving cloth in a typical wooden machine (Taan), an act of prettifying or embellishing is also performed in the dance through acting. In this way, the act of “Sili Tipne” or dancing also varies according to the place and caste. In this way, the Sili Tipne dance in some places is performed in a fast rhythm. Whereas in some places, it is performed in a slow rhythm also. During this dance, through acting or gestures songs are sung in harmony with the forefathers and nature which carry a fundamental feature of this community.

On the occasion of the Ubhauli festival, attires representing the ethnic identity are worn in the dances. The men wear black coats, khandi (raw-cotton) cloths, daura-suruwal made of Himalayan nettle or Nilgiri nettle, hats, cotton belts, binayo, murchunga, bukifool (a kind of mountain flower), khukuri on the waist, Chauri/Yak’s tail in the hand, etc and perform the dance in the beats of Dhol and Zhyampta.

In the same way, women are adorned with traditional ornaments including chaubandi cholo, fariya, patuka, binayo, murchunga, bukiful, with a sickle on their waists, and dance to the beats of zhyamta and dhol. During the performance of this dance, women, men, children, old people all come together and dance in a circular pattern.

On this occasion, protective elements of crops such as nature, air-water, gods and goddesses, and earth/land are worshiped. In this festival, dancing the Sakela Dance worshiping the creator and nature with pure body plus mind, along with drum, zhyamta, etc., it is believed that the crops will be good and everyone will be healthy.