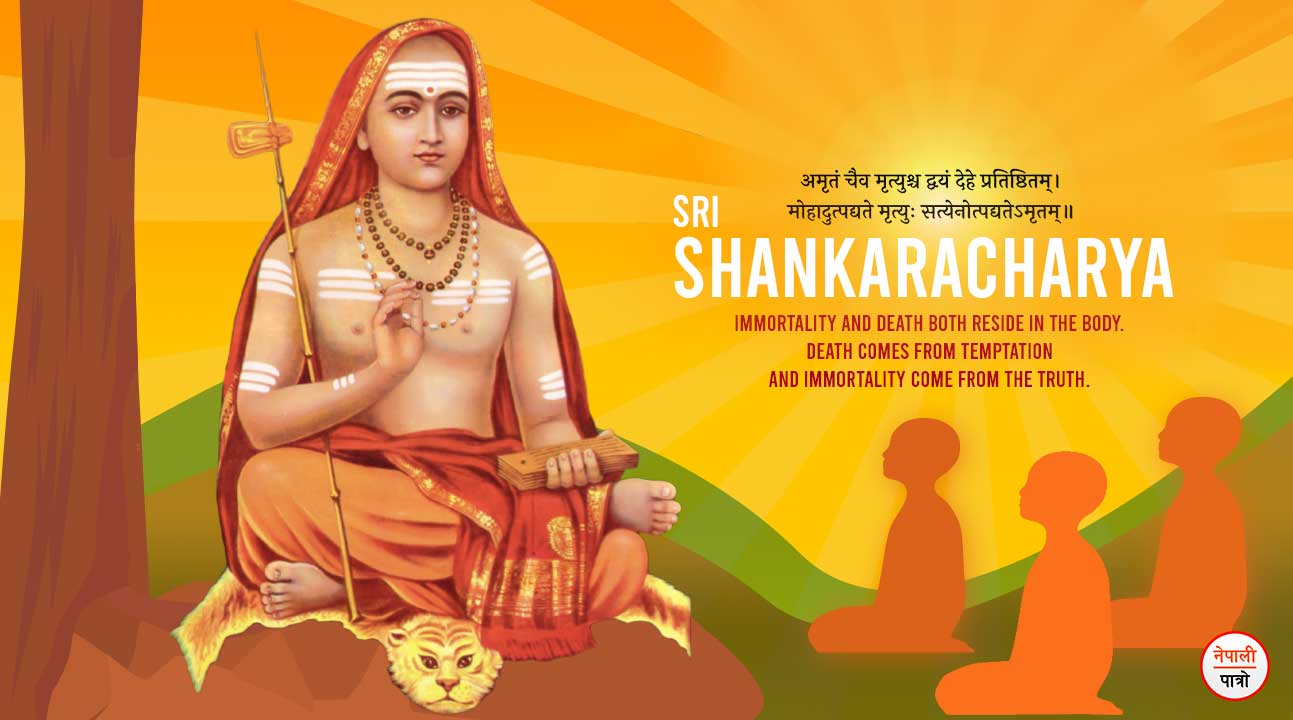 Shri Shankaracharya Jayanti. Shri Shankaracharya, with extraordinary talent and personality, was born on the Baisakh Shukla Panchami date. Born as the son of father Shiva Guru and mother Bishishta Devi in a place called Kaladi in the south of India, Shankara later became known as “Jagadguru Adi Shankaracharya”.

“Immortality and death both reside in the body. Death comes from temptation and immortality come from the truth.”

After the marriage of Shiva Guru and Mata Bishista Devi, who had no children for many years, spent many years worshiping Lord Shiva, wishing to have children. It is said that after their hard penance, Lord Shiva was pleased and asked for his blessings in their dream. It is said that when Lord Shiva asked for a blessing, Shiva Guru wished for “an omniscient and long-living son”. But, in the demand of an omniscient and long-living son, Lord Shiva said, it was not possible for one to be an omniscient as well as long-living. After saying this, he gave the gift of an omniscient son and said “I myself will be born as your son” and because Shiva himself was born as a child in that Brahmin family, he was named Shankar. Shankaracharya is believed to have been born in 508 BC and died in 474 BC.

Shankar showed that he was not a normal child during his early childhood, it is said. At the tender age of seven, he started studying the Vedas, at the age of 12, he became acquainted with many scriptures, and at the age of sixteen, he started composing many scriptures and even started teaching his disciples. Due to such great deeds done at such a young age, this same Shankar became famous by the name Guru Shankaracharya.

An interesting detail about Shankar is that one day, he was going to take a bath. On his way, he saw a Grave Digger (chandal) with his dog blocking the road. Seeing this, Shankar said, “O Chandal, leave the road, I am going for a bath.” Chandal replied to Shankar in a Sanskrit verse, “O sage, who are you telling to leave the path? To the body or the soul? If you are telling it to the soul, then it is purely omnipresent and passive. If you are saying it to the body, then it is like a piece of wooden log nothing more. It cannot leave the way. You are only making a false pride of your spiritual knowledge. In fact, you have no knowledge at all. Is there any difference between the shadow of the sun seen in the water of Ganga and the shadow of the sun seen in the alcohol? Is this your spiritual knowledge?  Shankar, who was astonished to hear such a wise voice of Chandal, became even more thoughtful. And, from that moment he realized that Being and Soul are integral.

It is believed that Shankar, who traveled half of Asia, died at the age of 32 at the Badrinath site in India. He preached for 24 years regarding Hinduism and its essence. The most important shrine he visited before his death was Pashupatinath Temple in Kathmandu, Nepal.

There are 22 commentaries, 54 sermons, and 75 hymns in the name of Acharya Shankar or Shankaracharya. Saririk Bhasya, a commentary is considered to be his most important work. The Shankar commentary of the Bhagavad Gita is still considered the basis for the interpretation of the Gita.