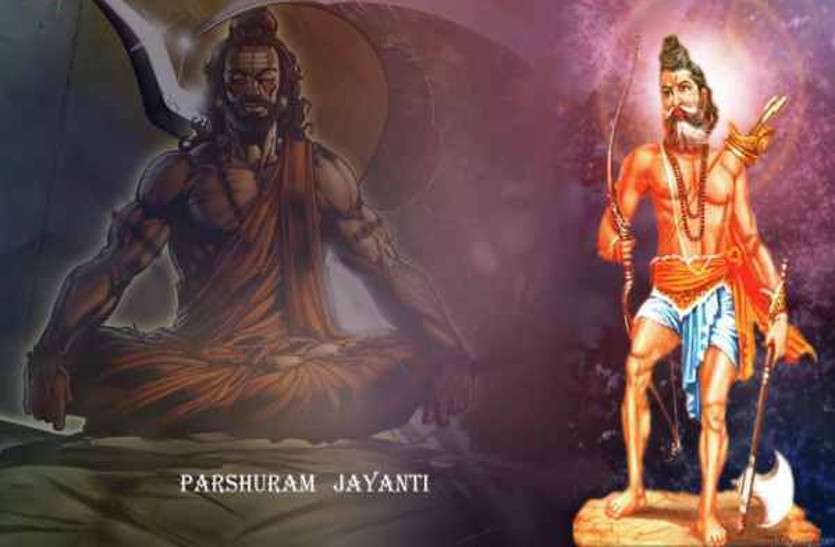 In the Treta era, to slay tyrannical kings and Kshatriyas, Lord Vishnu incarnated as Parasurama to establish the religion. Lord Parashuram was born on the evening of the Tritiya of Baisakh Shuklapakchya as a fifth and smallest son of Renuka, the daughter of King Prasenjit, and the Brahmin sage Bhrigu Jamadagnika. Therefore, the birth anniversary of Lord Parashuram (Parashuram Jayanti) is celebrated every year on the third day of Baisakh Shukla Pakchya which touches the Tritiya date during the sunset.

Parsuram is considered to be the sixth of the ten main incarnations of God Bishnu. According to history and mythology, Parashuram is the incarnation of God. Initially, the name of Jamadagni (son of Jamadagnika) was Ram. He was a great devotee and disciple of Lord Shiva. He received an education, gifts, and an infallible weapon Parsu (an ax /bancharo) from Lord Shiva. Thus, after wearing this ax, his name is believed to have changed to be Parashuram. Lord Shiva also has given him his Pinak bow. Although Parsuram was born as a sage’s son in a Brahmin clan, he had Kshatriya qualities in him.

Parashuram’s father, sage Jamadagni, was a brilliant man and an excellent theologian. Parsuram being the fifth son, his four elder brothers were Rukmawan, Sushen, Basu, and Bishwavasu. One day, while mother Renuka was returning home after bathing in the Ganges, King Chitrarath of Gandharva was playing with the fairies of heaven on the banks of the Ganges. Renuka was enraptured by their greedy embrace and was delayed in reaching the ashram. Sage Jamadagni used his divine vision. His eyes turned red with rage. And, calling his sons, he ordered them to kill the mother who was addicted to lust. Rukmawan, Sushen, Basu and Bishwasu were not ready to obey their father’s orders. Unable to contain his anger, he cursed the four brothers to become instantaneous fools. He then called Parashuram and ordered him to kill his mother immediately.

Parashuram, according to his father’s orders, struck his mother with an ax and killed her immediately. Jamadagni, pleased with his younger son Parshuram asked him to ask for the desired boon. Familiar with his father’s strength and power, Parshuram humbly asked for the gift of reviving his mother back to life and redeeming his elders. Sage Jamadagni was pleased with Parshuram’s obedience and cleverness, so he gave him the desired gift. Jamadagni even gave Parashuram the gift of eternal life.

One day, when there was no man in the sage’s ashram, King Kartavirya of Haihaya country, arrived at the ashram. There was a Kamadhenu cow in the ashram. Seeing the cow that gives anything what one asked for, he decided to take the cow anyway possible. “Such a cow is not needed in the Brahmin’s hut, but in the king’s court” saying that he wanted to take the cow away. While trying to stop, the sage’s wife Renuka was chased and the ashram was vandalized and looted. Later Parshuram fought and pierced Kartavirya’s thousand hands and brought back the freed Kamadhenu. In the absence of Parashuram, Kartavirya’s son came with an army, vandalized, looted the ashram and killed all the sage family.

From time immemorial, there is a history of society uniting against the tyrannical and demonic tendencies of injustice, oppression and violence. Mania of power awakens ego in man. That ego forgets the virtues like truth, religion, love, virtue, non-violence and men are blinded by lust and selfishness. According to the context described in the Puranas, with the blessings of Lord Dattatreya and the grace of Laxminarayan, King Kartavirya, of Haihaya obtained thousand-armed (Sahasrabahu), and became undefeated and glorious. Known in the world as the undefeated Sahasrarjuna, he was gradually getting filled with pride and ego.

King Kartavirya forgot the divine wisdom obtained through meritorious deeds of his past and used it for his pleasure and selfishness. He was inciting all the Kshatriya kings of the world and exploiting them to oppress their people. The patron kings of religion, themselves were ready to commit injustice, oppression and looting. Sages, Gurukuls, Brahmin societies and saints all over the world became terrified of this act. As the Kshatriya kings, including Sahasrarjun, were ruling the earth at that time by destroying justice, opposing oppression and no religion, Parshuram thus, took up his Parsu (axe) and resolved to take away their pride, ego and arrogance from these Kshatriyas. He destroyed the tyrannical Kshatriya kings like Sahasrarjun and took away the burden of the earth. The sages protected the Kshatriyas from the womb and made them kings, whereas Parsuram was making the earth Kshatriya-free. In this process, Parshuram had killed the Kshatriyas of the earth 21 times. The story of nine lakes filled with the blood of Kshatriyas during this massacre is described in History-Puranas. Parshuram used to give tarpan (pay homage) to the fathers and forefathers with the blood collected during the slaughter of Kshatriyas.

The sages made many efforts to save the existence of Kshatriyas. Sage Kashyap once accepted the whole earth as a gift and then he told Parsuram “please do not live in my land during the night time”. Parshuram then started living in Mahendra parbat (mountain called Mahendra) when he was told not to stay in Sage Kashyap’s land at night. Even his fathers and forefathers were deeply saddened by Parshuram’s brutal actions. And, in the end, his grandfather Richik himself came from the patriarchal world to remind Parsuram. Richik sage advised Parsuram to follow the path of knowledge according to tradition and to leave behind the war. Then Parshuram decided to leave the war and perform penance. After leaving the war, Parashuram promoted the Gurukul. He performed many sacrifices and from the power of his tenacity (Tapobal) revived his father’s life, by placing the head on its body. Maharshi Jamadagni came alive and got the fifth position among Saptarshi (seven sages).

After leaving the war, Parshuram had placed Lord Shiva’s pinak bow at King Janak’s palace in Mithila. After Janakandini, Sita picked up the bow, which could not be moved by any ordinary person, and cleaned the place where it was kept, King Janak announced that he would hand over his daughter only to a brave man who could lift Shiva’s bow, The Pinak. In the Swayamvara ceremony, many brave men of the world, mighty kings and princes were tested. After everyone was defeated, Rajarshi Janak was worried that he would not find a worthy groom for her daughter Sita but, when the Pinak bow was broken into three pieces by the power of Lord Ramachandra, Avadhkumar while trying to put its cord back on Pinak, King Janak was relieved. The swayamvara ceremony held after that of Ram and Janaki (Sita) relieved Rajarshi Janak’s worries and Lord Shri Ram was praised everywhere.

Upon hearing the news that Pinak bow was broken, Parashuram came to Mithila angry saying that his guru and deity, Shiva had been insulted. Maryada Purushottam Shri Ram calmed Parashuram and gave him the divine vision. Shri Ram drew sharpness, strength and power through the divine arrow and freed Parsuram from the role of Anshavatar (incarnation) after giving him his full introduction. Lord Shri Hari’s avatar Jamadagnya Shri Parashuram is still alive and is immortal for infinity. He is one of the leading Chiranjeevi among the eight prestigious chiranjeevis.

The day when God incarnated is considered to be the most auspicious day for all mankind. Therefore, history, mythology and scriptures have instructed us to celebrate such moments as a celebration. As it is the birth anniversary of God, there is a tradition to take a bath in the morning on the day of Parashuram Jayanti reciting ‘मम ब्रह्मत्वप्राप्तिकामनया परशुरामपूजनमहं करिष्ये’ and fast in silence all day long and resolve to worship Parashuram again in the evening with purification of one’s body. On the evening of Parashuram Jayanti, the following mantra should be offered with water to Lord Parashuram:-

After giving Arghya in this way, one should chant Ram Mantra all night and break the fast. Parashuram Jayanti.