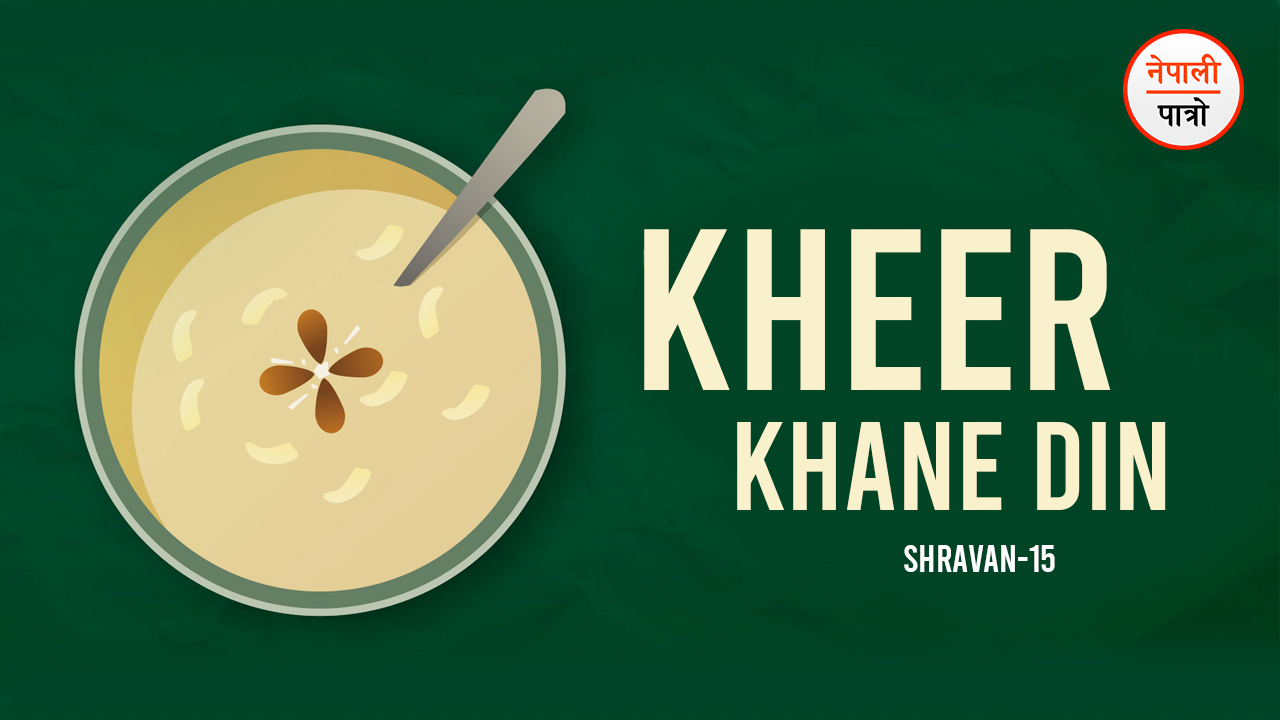 Kheer is made by adding dried fruits and spices along with rice in milk, which has a special significance in Nepali society. In Nepali Sanatan Vedic civilization, kheer as prasad is made for auspicious deeds like worship as well as Shraddha, and this nutritious dish is eaten during family gatherings.  According to religious beliefs, there is a tradition of consuming kheer before starting a new work.

During this month of heat and rain, hot kheer is good for health, this may be the reason why consuming it may have begun. There is a Nepali folk tradition of making different natural dishes according to the season and consume them. Accordingly, it is a trend to eat kheer during this month of Shravan to avoid the fatigue of the rainy seasons’ work during Asar and for precaution against the coming winter. Kheer can be prepared by adding milk to the finely scented rice like Basmati or the Taichin rice according to the need with a bunch of raisins, cashews, coconut, and dates fruit, etc. This tasty dish is recuperative as well as disease preventive for the human body and health.

Shravan is also the month of heat and rain, thus, the body’s immune system needs to be strengthened as diseases like shingles, scabies, and acne attack the body.  Therefore to boost the immune system, it is the custom to eat milk and milk products, especially kheer, during this month. According to Hindu mythology, this month is considered as the month of worshiping Devadhi Dev Shiva Shankar i.e. Mahadev. For this reason, it is customary to fast this month without consuming fish, meat, alcohol, etc., and to eat fruits such as mango, pear, and pineapple.

From time immemorial, special types of food have been introduced for special days. According to a legend, in the Dwapar yuga or era, one day Lord Krishna went to play the game of moving-tiger with a king in the guise of an ordinary saint. And, in return for his victory, he asked the king to provide free kheer to the poor and needy in various temples and monasteries. In remembrance of Lord Krishna’s victory over the king in the game, it is still customary to distribute it as an offering to the poor and needy in the temples. Similarly, in the Treta Yuga, it is said that the wives of King Dasharatha became pregnant after eating kheer.

Ayurveda also describes Kheer as an ancient food. The large green leaves of the Sal tree are made into Duna-Tapari by stitching them together with thin bamboo sticks. Eating kheer in such Duna-Tapari also increases its taste. The word kheer is believed to be derived from the Sanskrit word “kshir”. Kshir means a dish made from milk and rice. It is called “Payas” in some places or “Tasmai” in others.  In the Vedic Sanatan rites, it is also customary to cook kheer as an offering to the spirit of the departed on the day of Shraddha.

As our country, Nepal is an agricultural country the majority of the population here is dependent on agriculture, and it is believed that the tradition of eating kheer started as a celebration after the paddy plantation. While making kheer, ghee, dried fruits (pepper, dried grapes, coconut with cinnamon, etc) along with sugar mixed in fixed quantity with milk and rice make it more tasty and nutritious. Adding dried fruits to kheer gives vitamins as well as minerals. Rice contains carbohydrates while milk is a good source of calcium and protein.

Kheer made from skimmed milk is a good source of calories. Vitamin A can also be obtained from kheer made of cow’s milk. The ghee used in making kheer helps us to get the amount of fat needed in our body. Kheer made from skimmed milk or without ghee is considered soft food and can be fed to the sick patient too. They can easily digest it. Kheer is a suitable food for everyone and is loved by young and old.

According to Ayurveda, kheer is considered suitable to eat as bile accumulates in the human body during this season. Milk has a sweet cooling effect and black pepper helps to clear mucous secretion or Phlegm. Adding digestion-enhancing dried grapes to kheer gives it the ability to destroy bile. Saffron mixed with kheer not only provides strength but also brightens the complexion (skin and face) and helps to destroy bile. While making kheer, the dried fruits mixed in it contain various vitamins and minerals, carbohydrates, calcium, and protein. All of them are essential elements that the human body needs, so it is beneficial to eat kheer during this season.

Today’s day helps us to deepen our cultural significance, family gatherings, and closeness between relatives. The celebration of this day is justifiable as it carries the identity of the country. Different cultural traditions carry the original identity of our country. So let’s preserve all kinds of festivals celebrated by all the communities of Nepal as these festivals will also help us to preserve our various original identities. And let us fulfill our duty to pass on the importance of our cultural traditions to our future generations. On behalf of Kheer Khane Din-Shravan 15, Nepali Patro send its best wishes to all our readers and every Nepali. To Read this article in the Nepali Language please click here.