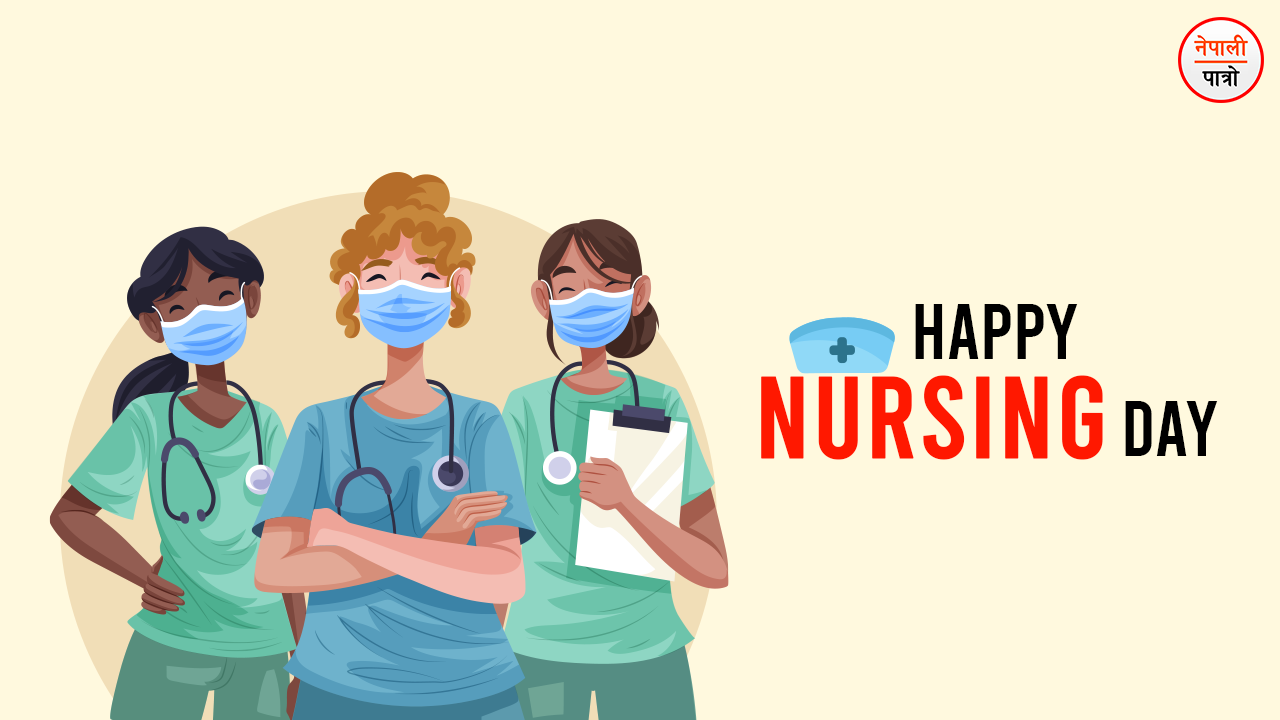 Nepal Nursing Day. Today is the 15th of Magh, i.e. Nepal Nursing Day. Nepal Nursing Day is celebrated all over Nepal on the 15th Magh every year. Today is a special day for all the Nepali nurses who are dedicated to their profession are always at the forefront of the service day as well as night and are always engrossed in the service of patients. Wearing a white coat (Nurse coat), a white cap on her head, with a bulk of medical supplies in her hand possessing a soft smile, is a health care provider, and she is known as a Nurse.

Whenever the word Nurse is spoken/heard, it is a very natural human phenomenon to think of a hospital, a health post, or a place to improve human health and the caring services of the nurses. Every year on the 15th of Magh, Nepal Nursing Day is celebrated in Nepal. Nepal Nursing Day is a day to appreciate the bravery, kindness, and service spirit of the nursing profession. Heartfelt salutations from the Nepali Patro family to all the front liner Nepali nurses who work very hard without complaining whether it is day or night.

Since today is Nepal Nursing Day, let us try to dig a little more into the history of Nepal’s nursing instead of the World (International) Nursing day. The history of this highly respected profession as nursing is not very old in this country, it is believed to have started in B.S 2013 (1956 A.D.) but its documents are hardly found.

It is said that during the Rana period of that time, Nepali disciples, including some Nepali housewives, were formally trained in nursing. It is believed that during the strict Rana rule of that time, some aristocratic families started the nursing profession in Nepal realizing the benefits of health care and the nursing profession plus its importance in general. The credit for giving birth to a dignified profession like nursing in Nepal goes to different people. In that period, some Nepali disciples from some aristocratic families like Bidhavati Kansakar and Dharmadevi Kansakar including Vishnu Devi Rai and Radha Malakar were trained to be health assistants from Allahabad in India around 1956 A.D. but no records of these training are found to date.

Whereas as per one case in Nepal’s history, the late Lamu Amatya is considered the first professional nurse in the country. The Government of Nepal declared the late Lamu Amatya the first professional nurse in the country on the 18th of Baisakh 2074. In a program organized by the Ministry of Health that same day, the then Health Minister Gagan Kumar Thapa officially handed over the prestigious certificate titled “Nepal’s First Nurse Certificate” on the basis of the legal pieces of evidence presented by Yogeshwar (Yogi) Amatya, one among the two sons of Lamu Amatya, declaring the late Lamu Amatya as country’s i.e. “Nepal’s First Nurse”.

Late Amatya graduated from Calcutta Medical College in 1954 with a degree in nursing. And, she started her first job as a professional nurse in Nepal on Chaitra 13th of 1956 A.D. She rented a house in Chhetrapati as part of the “Nursing Training Project” under the Ministry of Health. In the beginning, she was paying the rent from her own pocket and lots of young people joined the center to be a nurse and to help the destitute. Born on January 27, 1932 (1988 B.S. Magh 14) in Darjeeling, India. Lamu Amatya passed away in Kathmandu on 19th Jestha 2069 B.S.

The beginning of nursing profession in world history began when the military conflict known as Crimean War (Oct 1853-February 1856 was raging on. In that war, Russia lost to France, the Ottoman Empire, the United Kingdom, and the Piedmont-Sardinia alliance. The war was fought for the rights of the Christian minority in Palestine, which was then part of the Ottoman Empire. The French promoted the rights of the Roman Catholics, and Russia promoted the rights of the Eastern Orthodox Church. These two nations with their interest in the expansion of their respective empires and the balance of power between the two nations, the French and British were among the ones to set forth priorities to protect the Ottoman Empire. Long-term reasons for this war included the collapse of the Ottoman Empire, the expansion of the Russian Empire in the previous Russo-Turkish wars, and the British and French defending the Ottoman Empire to maintain Europe’s balance of power. Let the readers of the Nepali Patro know and remember that the Crimean War, one of the wars among many wars fought at different times around the world, was led by various countries to their advantage, which is still known as the “infamous incompetent international genocide”.

It was during this same Crimean War that Florence Nightingale (May 12, 1820 – August 13, 1910) an English social reformer, and statistician became the founder of the modern nursing profession. Nightingale became famous for the service she rendered as a manager and trainer of nurses during that vicious war. During that time, she organized nursing care facilities for the wounded soldiers at Constantinople which in turn paved the way for the Nursing career to be a respectable profession. And, thanks to those contributions, she became to be known throughout the world as “The Lady with the Lamp,” especially as she used to go on rounds during the night also with a candle in her hand to serve the wounded soldiers.

In honor of her pioneering work in nursing, new nurses today are sworn in at the start of their career under the “Nightingale Oath”, and the Florence Nightingale Medal, the highest international honor a nurse can achieve, is awarded in her name and the annual International Nursing Day is celebrated on her birthday.

Now, again returning to our own country Nepal, we have already mentioned that the history of nursing in Nepal is not so old. However, the importance of nurses at this present time and its perspective is so great that we cannot even describe it in words. And Nursing as a profession in Nepal now has developed very much. That too as a dignified, respected, and important profession. Can we imagine a hospital without these tenderhearted nurses? Of course, we could not.

Considering these various important reasons/factors, every Nepalese should treat and look at the nursing profession with respect and dignity. These front-liners who work day or night devoted to the service of the sick are indeed the true jewel of the nation. There should be no doubt about it.

We all need to show due respect to these nurses who are giving us medicine according to the advice or medicines prescribed to them by a doctor, dressing the wound and applying it with medicine, etc so that we can recover from any disease or illness in a short span of time. This honor is not only to be shown today on this occasion of Nepal Nursing Day but each and every day including every time we get services from them, we should be proud of all these Nepali nurses. On the occasion of Nepal Nursing Day, on behalf of the Nepali Patro  family, we would like to extend our deepest gratitude to all the dedicated nurses in the nursing profession, including Nepalese here in Nepal as well as those working outside of here. With best wishes for the future also on this auspicious day to all the nurses of the world. To Read this article in the Nepali Language please click here.