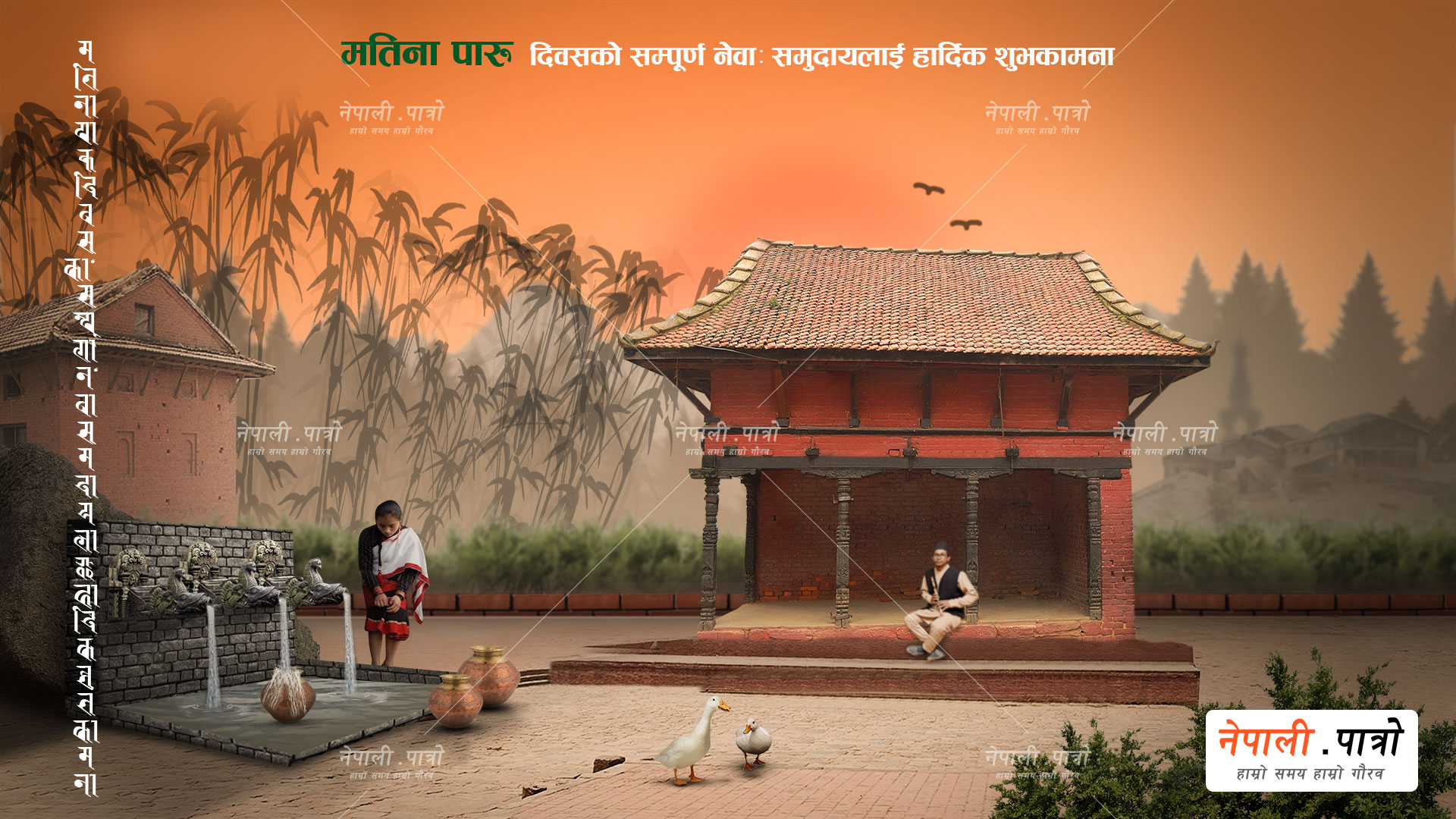 Today, Paush Krishna Pakchya Pratipada or Thilla Ga: is the “Matina Paru” (Valentine Day) of the Newa: community. Newa: community is one of the aboriginal community inside Nepal among many. Matina Paru is a typical lovers’ day celebration of this community. All our readers know about “Valentine’s Day” which falls on February 14 of the English calendar. However, very few of us may know that the Newar community of Nepal, the Newas, also have their own original Valentine’s Day known as Matina Paru. It is a great irony for all of us that this culture, so important for this community as well as for all Nepalese, seems to be almost extinct nowadays.

In the Nepal Language also known as Nepal Bhasa, Paush Krishna Pakchya Pratipada the day after Yomari Punhi or Dhanya Purnima is known as “Matina Paru” among the Newa: for centuries. But, due to the popularity of western Valentine’s Day, only a handful of people celebrate this Original Lovers Day or Matina Paru of the Newa: Community these days. In Nepal Bhasa, “Matina” means “Love” and “Paru” means “Pratipada”. According to this community’s beliefs, the love and affection, or love proposals made on this Pratipada are successful and the love is long-lasting and permanent.

According to the tradition of the Newa: community, on the day of Yomari Punhi, it is customary to go to nearby houses, including elders, along with children and sing songs and ask for Yomari. This practice is known as ‘Yomari Fanegu’.  Yomari Fanegu culture is associated with love and affection. In this way, while going from house to house asking for Yomari, lovers would get a chance to peep, talk secretly with their beloved ones. Because it was often difficult to get such an opportunity according to the society and traditional beliefs of that time.

In traditional days, topics such as love and affections especially among unmarried were forbidden in society.  Therefore, Yomari Punhi’s ‘Yomari Fonegu’ culture was used to be exercised as a “cruising day” at that time. And, lovers would meet secretly the next day. At that time, cell phones, the internet, phones, etc. were not in existence for exchanging information like these days. Therefore, the meeting timetable and place used to be decided during Yomari Fanegu.

Poems and their Connection to the Society

Lovers used to express their special expressions as follows:

Meaning: During the dusk, when the sun starts to turn red, from Bungcha Hiti Falcha (small resting house especially at the side of the water source), behind the bamboo trees….

Similarly, the following touching lines below are taken from the life story of a beautiful, self-respecting, and true love priestess “Rajmati” which still resonates in the streets, toles (block), chowks (square), and nanies (small square) of Newa: society even today.

As the beauty, you have given, O God

You did not let me live comfortably even for a while

I couldn’t cry though I know how to

Cannot take a  long sigh either!!

Many such oral stories, and songs that were prevalent in the Newa: society at that time, have now become like legends which, like in the story of Rajmati, have enough places to say that they contain real moments of that time. This can also be seen and understood from the paragraph below.

She came to fetch water at Maru-hiti,  struck her finger on a large rock

Rajmati o attractive, if you come with me….

These wonderful love words are composed by a lover in the memory of a very beautiful woman Rajmati of Kathmandu valley of Nepal of that time. These words also clearly reflect the lifestyle of that time.

Water Sources and its Usage

In those days in the villages, there were Padhero, Kuwa (small well-like structures), etc for the provision of drinking water for the community. Likewise, it can be found that the Newa: society in “Ye” meaning Kathmandu city at that time used to built stone fountains (Hiti), Tü (well), Bung (small well), etc. for the purpose of fulfilling the need of drinking water for the city. And, it is clear from the above-mentioned Rajmati song that the same Hitis’, not only served the water needs of many people around Kathmandu city at that time but these places were used as meeting places for lovers also.

In this way, these water sources seem to have become a witness to a tragic love story like the famous Rajmati in Newa: society. How can we rule out the possibility that may be in those days,  maybe even in the mountains, hills, and Terai (Madhes), every Nepali, whether Newa: or Tharu, Mongol or Brahmin, might have had a “love day” or other traditional days like this one in the Newa: civilization?

Therefore, let us follow and adopt the good things according to the need of the time, but let us not forget the good things that exist in our own culture, our civilization, and our roots, too. Let us move forward by forgetting/eliminating the wrong/bad rules, laws in our old customs by learning, using, and adopting from other civilizations. It is now the duty of every Nepalese to protect and preserve their language, dress, culture, civilization, way of life, etc. And it is the demand of time to move forward by harmonizing this duty with the rights.

Just as the name of Rajmati has been corrupted to Rajamati, in the same way, if special days, festivals, even the civilization of every community in Nepal, are not properly protected and preserved, they might be completely annihilated. As day by day, we and our descendants are adopting more to the Western civilization, and forgetting our roots, is not an annihilation of our festivals, civilizations, etc. a possibility in the near future?