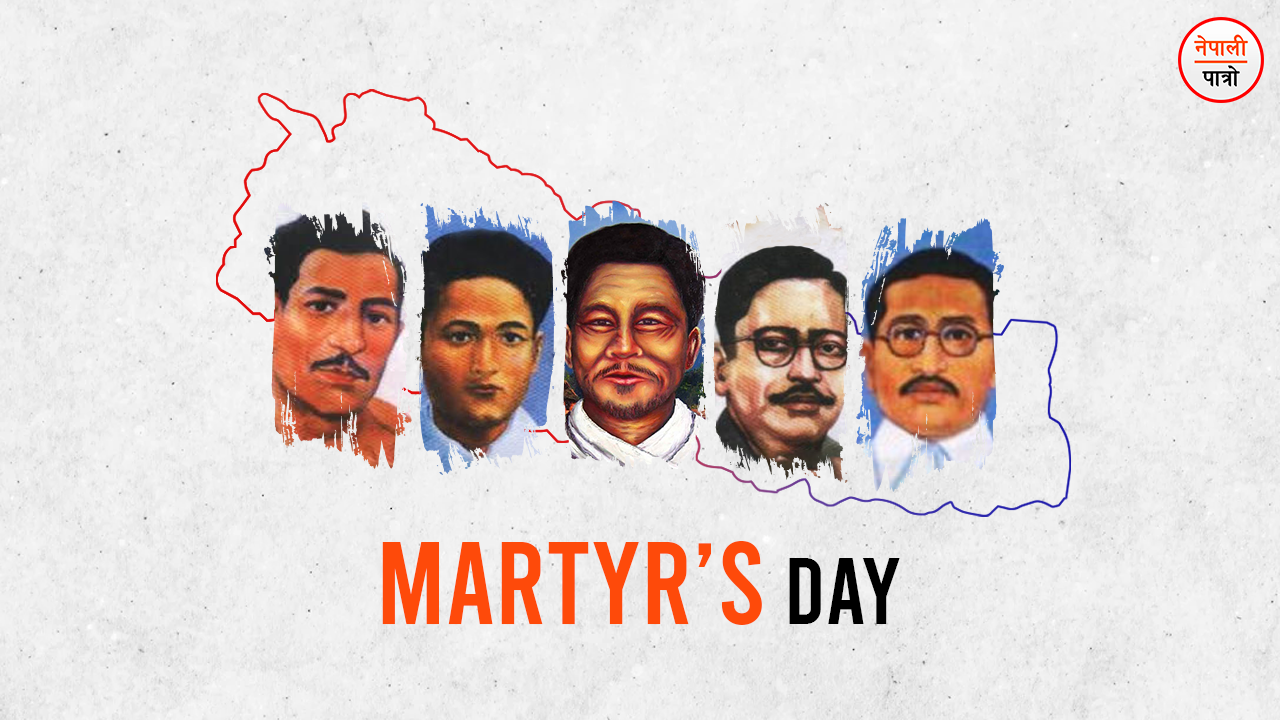 In Nepal, the 16th of Magh is celebrated as “Martyr’s Day” in the whole country remembering the Martyr’s who gave their life for the country. Every year from Magh 10 till 16 Martyr’s Week is observed, and on the last day of that week the 16th is celebrated with special importance as “Martyr’s Day”.  All the people who sacrificed their lives for the country are the martyrs of Nepal. The word martyr refers to those immortal people who sacrificed their lives for raising their voice and protection of the various rights, freedom of the country, culture, and existence of the people as well as for freedom of the people to remain forever in the minds of every patriotic citizen. Martyr’s Day is being celebrated every year on the 16th of Magh since the year 2012 B.S. in association with Kathmandu Metropolitan City. On this day, all the known and unknown martyrs who sacrificed their lives for the country to bring a new system of governance in Nepal, including various movements at different times, are remembered as Martyrs and are commemorated for their sacrifices.

First of all, the celebration of Martyr’s Day was started to be celebrated in the memory of  Martyrs who fought against the Autocratic (Jahaniya) Rana regime. Lakhan Thapa is considered to be the first martyr of Nepal and on this day various martyrs including those who fought against the Rana regime are remembered as Dharmabhakta Mathema, Dasharath Chand, Gangalal Shrestha, and Shukraraj Shastri.

The common people, including Martyr Shukraraj Shastri, Dasharath Chand, Dharmabhakta Mathema, and Ganga Lal Shrestha, started to protest against the Rana regime. On the charge of uniting and educating the people in favor of Democracy, they were executed by the then Rana ruler in 1997 B.S i.e. 1936 A.D. Shukraraj Shastri was hanged to death on the Celtis Australis (Khari ko Rukh) tree on the 10th of 1997 B.S. at Pachali, Teku on charges of inciting the people to fight for their rights and revolution by establishing a political party called “Nepal Praja Parishad” on 20 Jestha 1993 i.e. 2nd June 1936 A.D against the autocratic Rana regime. Similarly, Martyr Dharmabhakta Mathema was given a death sentence and was hanged from a tree in Sifal on 13 Magh 1997 B.S i.e. 26 January 1941, and Gangalal Shrestha and Dasharath Chand were shot dead by the Rana government at Shobha Bhagwati on 15 Magh i.e 28 January the same year.

During the 10 years of armed conflict (Maoist people’s war), the people’s movement of 2062/63 BS, the subsequent Madhesh movement, and various other movements for rights and identities, there has been a lot of human loss and casualty. When a person dies in these sort of movement there is a practice of declaring the person as a Martyr in the country. There have been so many agitations and struggles in the country and countless people have lost their lives, but the government does not yet have any official data on how many people have been martyred in the country.

The movement to bring democracy in Nepal started already in Nepal during the 2007 B.S, but the 2045 B.S people’s movement was very large, and it indeed established Democracy in the Country. After that, a political party called “Masal” broke up and a new party named “Nepal Maoist Party” was born. After which Nepal entered into an armed conflict of 10 years which at last changed the country into The Federal Democratic People’s Republic of Nepal. The Maoist armed insurgency that started in Nepal during the year of 2052 BS i.e., 1995 concluded peacefully in the year 2063 BS i.e. 2006 A.D, after various talks under the coordination of all the political parties of Nepal.

On 21st November 2006 i.e 5 Mangsir 2063, then Prime Minister Girija Prasad Koirala and the then CPN-M Chairman Prachanda signed the Comprehensive Peace Agreement (CPA) 2006 (2063 BS) committed to democracy and peace for the progress of the country and the people. Elections of the Constituent Assembly were held on April 10, 2008, i.e 2064 Chaitra 28, and, the newly elected Constituent Assembly of May 28, 2008, i.e 15 Jestha 2065 B.S  ended 240 years of monarchy and declared Nepal the Federal Democratic Republic with the New Constitution of Nepal. On September 20, 2015 (Asoj 3, 2072 BS), the new Constituent Assembly of Nepal was announced by a majority of Constituent Assembly members. With this historic achievement, the decades-long dream of the Nepali people to make a constitution through elected representatives has become a reality at last.

The people’s war has brought many changes politically as well as socially. Even though a decade long people’s war has damaged the country in terms of many human lives and physical structures, as well as psychological problems to many people in general with families, divided, etc, the fact that Nepal is developing in a new way with the proclamation of a new constitution with the advent of a republic in 2063 BS cannot be ignored. However, more than 17,000 civilians were killed in the 10 years of armed insurgency and many are still missing to date.

In short, the country needs to move forward on the path of progress with the new system established by the invaluable sacrifices and lives of so many martyrs and the struggle of the Nepalese people for ages. But, the Nepalese people should always be vigilant so that the sacrifices made by so many martyrs for the country do not go in vain due to the political and personal interests of many political parties that exist in the country. Likewise, in the same way, the great responsibility of choosing the right person with a clean image without engaging in party or personal interests during the election has now fallen on our shoulders that is on the shoulders of the Nepalese people.

Martyrs’ Day is celebrated to commemorate, remember and pay homage to the heroic martyrs like Shukraraj Shastri, Dasharath Chand, Dharmabhakta Mathema and Ganga Lal Shrestha, and many other martyrs, for sacrificing their lives for the greater good of the country, people, and the contribution of other warriors of various democratic movements. Martyrs’ Day is celebrated today as a day of martyrdom of highly courageous heroes by evaluating the courage and sacrifice of all the martyrs who have gained heroic image fighting for the rights of the nation and the coming generation by participating in various movements at different times in Nepal and remembering them. As a special celebration of Martyrs’ Day, the main function committee is formed under the coordination of the Kathmandu Metropolitan City Corporation.

In the morning the function committee along with the general public gathers at Santibatika, Ratnapark and a morning procession (Prabhat Pheri) starts which passes along the Ranipokhari area reaches Martyrs’ Monument and finishes with different important events.   Heads and members of constitutional bodies, ministers, and the general public also participate in this program.

At the end of the morning procession, a wreath-laying ceremony is held at the statue of the martyr at Lainchaur by the Prime Minister or a prominent person among those present in the procession. We must never forget the fact that all our martyrs sacrificed their lives for our rights and for the rights of our future generations, but we must celebrate this day with special priority. If they had not fought so hard and sacrificed their lives for us, we would still have been going round and round as if in a maze in the old system of governance.  To Read this article in the Nepali Language please click here.