The day when Lord Shiva appeared first in this world is the night of Shiva or also known as Shivaratri. The religious belief state that the form of eternal Lord Shiva, the Jyotirlinga (the Shivalinga form of Brahman or three divinities, Bramha, Bishnu, and Shiva himself.) came to the public vision during the dark night of Falgun Krishnapaksh, on Chaturthi. Since the adorable god of the Hindus, Lord Shiva can be easily pleased, he is also worshipped as “Ashutosh”. This holy night is called Mahashivratri because God shiva himself appeared this night.

Lord Shiva is eternal, universal, ubiquitous, and unending. Lord Shiva is the trilogy of Brahma-Bishnu-Mahesh for the creation, upbringing, and destruction of the entire material world. Shivratri is considered to be the most sacred to whole human beings since it was the first night that lord shiva appears in this world as a Jyotir Linga.

During the era of Satya Yuga through the churning of the ocean, a toxic-venom (Hala Hal) was produced. The effect started to take human lives due to its fierce flame. Not being able to see the suffering of nature and people, Lord Shiva drank the venom but he guarded it on his throat. His throat changed its color to blue because of the effect of the venom, that is why lord shiva is also famous as Nil Kantha.

The Acharya (Principal) of all the Vidyas (knowledge) and arts is Lord Shankar. Grammer originated from the Maheshwar Sutra. The music originated from the sound of the Lord’s damaru (a two-faced small drum) and dances were also created by the Natraj, Lord Shiva himself. People and gods too are believed to have had received Ayurveda, Archery, and entire other knowledge from Lord Shiva.

The Puranas (holy scriptures) describe the importance of four major nights – Kalaratri, Moharatri, Sukhratri, and Shivaratri. Among these, Shivaratri celebrated on the Krishna Chaturdashi is especially important. Shivaratri is the dearest day of Lord Shiva, which brings happiness and well-being to the hearts of all living beings, suffering, and distressed beings.

Considered to be holiest among the fastings performed on the night of Shiva, (Shivaratri) people offer the best of the vows with leaves of Bel Plant (Aegle marmelos) for the fulfillment of desire as well as lifetime happiness and Shiva Lok after death.

During this night of Shiva, worshipping, and fasting done without food or water, staying awake during the night, chanting the shiva hymns are considered to be the best karmas (Shiva Pujan) of this night.

There is a tradition of worshipping shiva for four prahars (prahar starts from sunrise and a day consists of four prahar till sunset, three hours is one prahar). In each prahar, an argha (offering water for the respectful reception) is given using sixteen types of homage and services. After the worshipping of the first prahar, shiva lingam should be provided with a special bath of milk, or a bel leaf /fruit, and Argha should be given  reciting the following mantra:

After the worshipping of the second prahar, the shiva lingam should be provided a bath with curd, lemon/ citrus medica, and Argha should be given reciting the following mantra:

After the offering of the Third prahar, Shivaji should be provided a bath with Ghee including banana, and Argha should be given reciting the following mantra:

After the offering of Fourth Prahar, a bath with Honey should be provided with the Argha to Shiva reciting the following mantra:

Then in the morning time, after regular bathing and purification, the Argha should be given reciting the following mantra:

After the special ritual of Argha, worshipping should be concluded by providing food to the Brahmin. 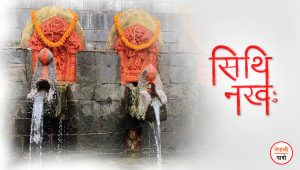 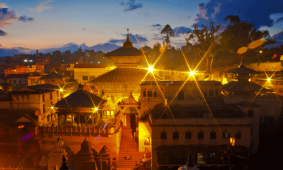