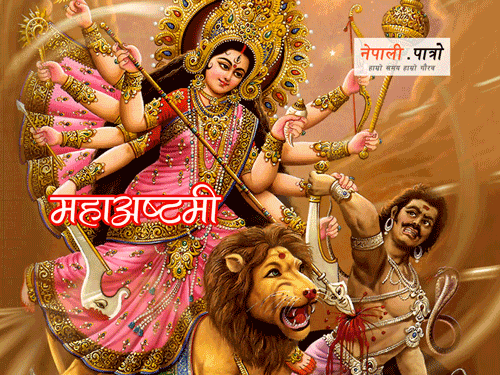 Hindus throughout the country in Nepal, those communities who celebrate Bada Dashain observe the eighth day of this ten-day-long Dashain festival as the “Maha Ashtami”, by worshipping Goddess Durga Bhawani. It falls on the bright blue lunar night, Ashwin Sukla Pakchya Ashtami tithi of Ashwin month according to the Hindu Calendar. In Dashain Ghar (Puja Kotha, a worship room) invoked by Navadurga Bhawani from the first day of Bada Dashain, on the eighth day of Navratri, i.e. on the day of Maha Ashtami, special worship of Mahakali or Bhadrakali is performed. Along with various nine forms of Navadurga Bhavani, they are as follows:- Shailaputri, Chandraghanta, Kushmanda, Skandama, Katyayani, Bramhcharini, Kalratri, Mahagauri, and Siddhidatri. People during the worship of goddess Durga, on the eighth day (Ashtami), perform the sacrifice of five different animals like Goat, buffalo, hen, pigeon, and duck.

According to the Hindu scriptures, there is a religious belief that Bhadrakali was born on this Ashtami day as a very powerful mother goddess who destroyed the sacrificial fire (Yagya) of king Daksha Prajapati, during the Satya Yuga. Therefore, on the day of Maha Ashtami, especially the goddess Bhadrakali is duly worshiped with various sixteen puja items. On this day, most of the Nepalese also worship their own deity/deities, while in all the houses of the farmers, the plowing materials established inside the worship room on the seventh day of the festival, such as plowshares, pickaxes, and hand weapons, etc., also are worshiped.

The Hindus all over the world celebrate Sharad Navaratri and Chaitra Navaratri, among these two Navaratri, celebrated widely by devotees of Goddess Shakti the Sharad Navaratri holds more importance as it falls during the Bada Dashain festival. Each one day of Navaratri is dedicated to one form of the Goddess Durga therefore, on all nine days, devotees wake up early, after the Nitya karmas, purify themself with a bath, and pray to Goddess with multiple offerings of fruits and sweets, etc. In this offering, one should include nine types of flowers, nine janau, nine betelnuts, nine incense, nine pairs of oil lamps, nine small plates of sweets, etc, and nine coins. In the middle, one should put nine mana (ten handfuls), or nine pathi (eight manas), or nine handfuls of rice representing the Goddess Navadurga and perform the worshipping procedure.

The eight-day of Navaratri is called Ashtami, Durga Ashtami, or Maha Ashtami. On this day, people offer special worship to the goddesses Mahakali, Mahalaxmi, and Maha Saraswati. Maha Ashtami of the Dashain festival is considered a special day when Goddess Durga attained her power. On this occasion, people perform religious ritual rites, inside Dashain Ghar, armories with different arms as swords, etc are worshipped. The people read the Durga Saptashati scriptures. Devotees visit various temples and shrines dedicated to goddess Durga or her forms also known as “Shakti Peeth” in the Kathmandu valley from very early morning to perform their offerings and worships.

People also worship their daily using apparatus such as vehicles and machinery, etc, and weapons kept at Dashain Ghar. Special Durga puja worship and prayer ceremonies are held at the Dashain Ghar of every household. Likewise, in the same manner, even the State performs these worships and offering to the Nava Durga in Dashain Ghar situated inside the old palace of Hanuman Dhoka at Kathmandu Durbar Square. People who do not sacrifice animals on this day of Maha Ashtami, offer sacrifices of various vegetables (cucumbers, pumpkin, etc) instead of living animals. On this day, a special Kalaratri worship is held at midnight at the Dashain Ghar of Hanumandhoka.

On the day of Maha Ashtami, special puja like ‘Astra Puja’ takes place in Dashain Ghar, and as part of Astra puja, Goddess Durga’s weapons with which Mahishasur demon and his associates Chanda, Munda, and Raktabija were defeated are worshipped with great fervor. The scriptures mention that, after a long-drawn battle between the Mahishasur and Goddess Durga, it was on this very day of Ashtami, Goddess Kali appeared from Durga’s forehead and annihilated Mahishasura’s demons and his associates Chanda, Munda, and Rakthabij. This is one more reason behind the worshipping of the eight forms of shakti, in the form of the all-encompassing Goddess Durga also known as “Ashta Nayikas”.

Therefore on this day, Ashta Nayikas, or the eight forms of shakti i.e Shailaputri, Chandraghanta, Kushmanda, Skandama, Katyayani, Bramhcharini, Kalratri, Mahagauri, and Siddhidatri are worshipped as an all-encompassing “Shakti” or Goddess Durga Bhawani. Each form of the individual name of Durga can be worshipped by reciting the following simple mantras along with an offering of water, fruits, oil lamps, incense, etc. The figures of Shailaputri, Chandraghanta, Kushmanda, Skandama, Katyayani, Bramhcharini, Kalratri, Mahagauri, and Siddhidatri should be established starting from a southward direction going towards the northern direction, decorate them with colorful clothes in the same south to north order. Then offering different objects of worship to each goddess one should perform the puja by reciting the following mantras to each individual form of Durga. To Read this article in the Nepali Language please click here. 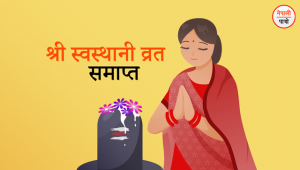 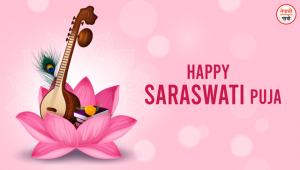 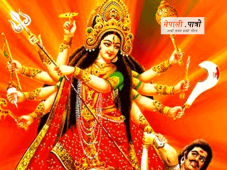 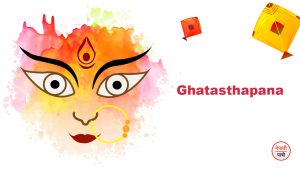 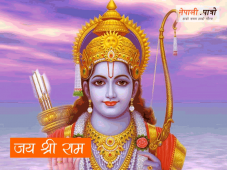 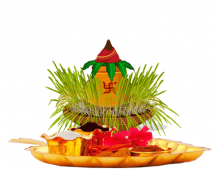