The date on the full moon day of Shravan Shuklapakchya is called Shravani Purnima or Janai Purnima. On this day, the Vedic Sanatan Varnashrama religion, the Dwija or Brahmins, perform Shravan, Smriti, etc. There are scriptures saying that all acts like Shravan Karma i.e. Ganasnan, Rishi Pujan, Rishitarpani, Utsarjan, Upakarma should be done for the atonement of the iniquity, misdeeds, misconduct, misbehavior etc done during the year. After doing all these deeds, the Brahma Sutra (Janai) prepared by the classical method is worn after invoking Brahma, Bishnu, Rudra and Tantudevata by Vedic deeds and making them holy and powerful, that is why this full moon is called Janai Purnima. This day is also called Rakshabandhan as the deities are duly invoked and tied in the hand even in Rakshasutra.

On this day, after performing daily worship, Brahmins should go to rivers, lakes, ponds, etc. and take Gansnan. Gansnan is the bathing of the body in the form of Sankalpa and chanting of mantras by applying holy medicines like Panchagavya, Bhasma, Mrittika, Apamarga etc. on the body. After bathing, the act of invoking the Janai and wearing it should be done. In this process, Deep-Kalash-Ganesh is worshiped and Rudrabhishek is performed by placing kush made idols of seven sages on a plate. Kashyapa, Bhardwaj, Gautam, Atri, Jamadagni, Bashishta, Bishwamitra and Basista’s wife Arundhati are worshiped as seven sages. After this, rituals like Yagnopavita Abhimantran, Dan and Rakshabandhan etc. are performed on this full moon day.

As the helper of Brahmaprapti, an indicator of vedic scripture, Janai is called Yagnopavita. Another name for it is Brahmasutra. A person not wearing the Janai has no right to perform religious acts. Traditionally, Newar communities (excluding those communities who do wear janai) those who do not wear Janai and other castes, who also do not wear Janai, offer Jajalka to gods like Ganesha in worship. The scriptures tell us about the rules for wearing janai, chanting gayatri mantra on the daily basis, doing shravani karma, i.e. doing upakarma, giving janai to deities, for-fathers and Brahmins.Those who do not follow them put special uttariya clothes to perform sabbya and apasabbya in shraddha.

‘यज्ञेन संस्कृतम् उपवीतम्’ As it is said, the janai that has been consecrated on this full moon day can be changed for one whole year. Next year, new one should be made and if there are any old ones left, they should be consecrated together with the new ones. We have to do the work of spinning, weaving, and making Janai with Purity and holiness. The deity associated with janai is worshiped as Tantudevata. Omkar, Agni, Sarpa, Soma, Pitru, Prajapati, Anil, Yama, Bishwedeva are worshiped in nine lines of Janai. Similarly, Brahma, Bishnu and Rudra are worshiped in the glands of Janai. After this the sages are given the tarpan. This full moon day is also called Rishitarpani Purnima because Katyayanadi is the act of offering gratitude to the sages of the Sakha Sutras or offering tarpan to the revered sages created by Kush to satisfy them.

Why perform tarpan for the sages?

The Vedic classical knowledge and practical knowledge that one has received from the Guru gradually becomes tainted and it becomes one’s duty to keep the knowledge fresh at all times. That knowledge should not be forgotten, the technology of new things should be developed from the acquired knowledge, the ability to invent knowledge should be developed, thus, the sages are offered with tarpan to keep the knowledge of new subjects intact keeping the teacher as a witness. In the same way, the acts of tarpan to sage are performed so that there will be no filth, inferiority, inferiority complex etc. in education. Remembering the wise ancestors of one’s clan millions of years ago and pronouncing their names makes one feel that one’s field of study has increased rapidly. Since the influence of the glorious sages is to gain special energy and efficiency in one’s field of work, there is a tradition to pay homage to the sages in Rishitarpan. The sages of one’s clan, including Ahnik, can be found in the scriptures entitled ‘वंशानां ब्रुवणम्’.

Now take the open janai in hand and put it on raising the right hand while reciting this mantra. –

After that, the old one should be submitted in a clean place by reciting ॐ and one should chant the Gayatri Mantra 1008, 108, or 10 times. The old Janai should be removed only after putting on the new one first. After this, one should receive Rakshabandhan from the Guru and at the end with water in hand following mantra is to be recited ‘अनेन नवयज्ञोपवीतधारणार्थे कृतेन यथाशक्ति गायत्रीजपकर्मणा श्रीभास्करदेवता प्रीयतां न मम ।’ and the water should be offered on the land.

The new Janai is sanctified with Gangajal, Kushodak, Panchamrit, Shrikhand and other fragrant substances, anointed, invoked and made stronger by Vedic mantras, through worship of various deities. Therefore, by wearing the janai with an auspicious mantra, celibacy, strength, radiance and virtue are attained. Wearing janai properly invoked, it will withstand a great deal of adverse conditions as ghosts, phantoms, etc. do not cause evil forces. Special qualities like sharp intellect, quick recollection, quick vibration, discernment, decisive power are acquired in a person by wearing Brahma Sutra.

According to the mythology, during the war with Daitya Raja Vritrasura which lasted for 12 years in the Satya Yuga, for the welfare of the gods, Devraj Indra was given spiritual strength by Dev Guru Brihaspati by tying a rope on the date of Shravan Shukla Purnima, Janai Purnima. Due to the influence of the same Rakshasutra, Devraj Indra succeeded in defeating the demon by keeping himself safe, thus It is customary to wear Rakshabandhan on one’s hand with the wish of liberation from demonic instincts. Similarly, a very powerful king Bali was also tied with Raksha Sutra is mentioned in the context of Raksha Sutra and following mantra is recited while tying the rakshabandhan.- 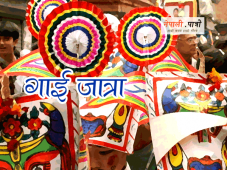