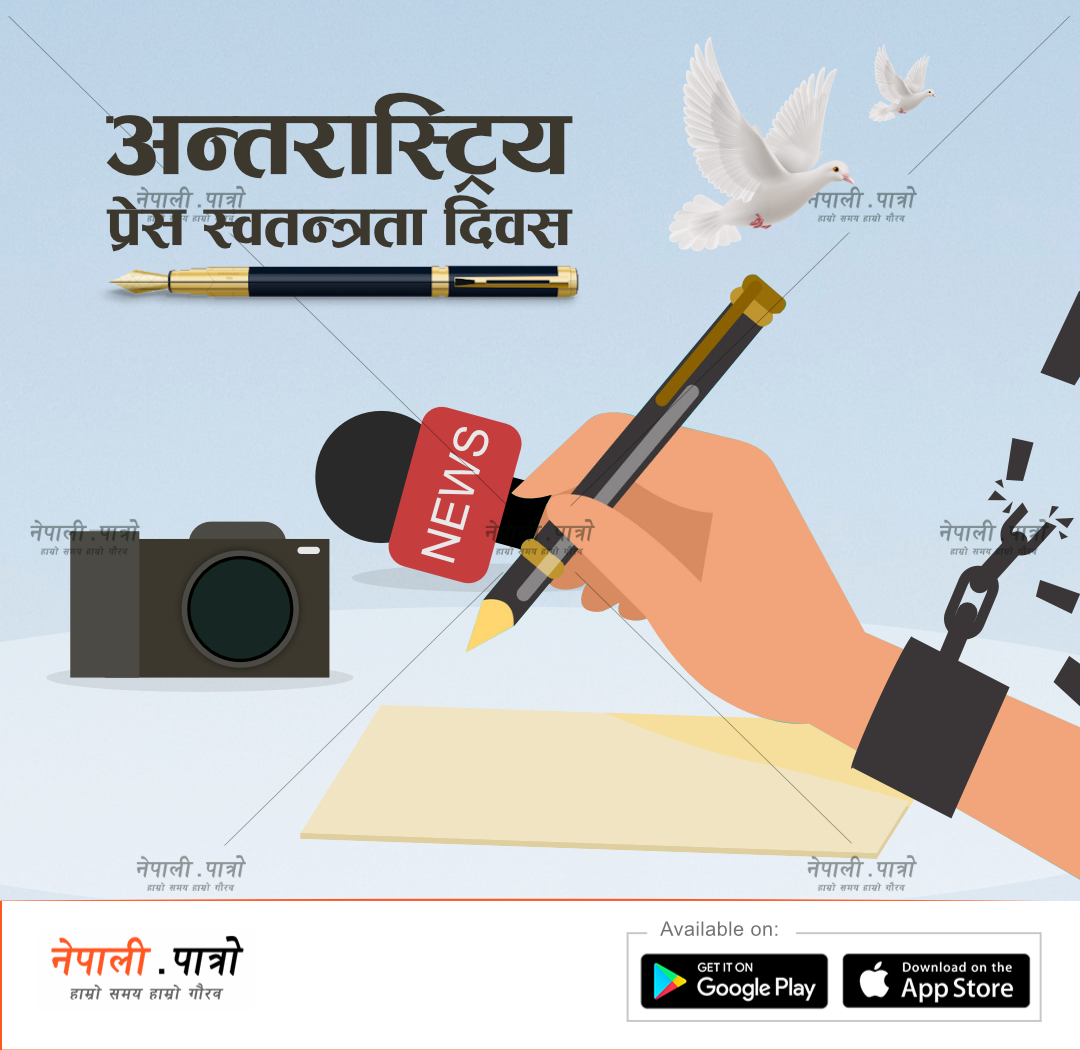 By Nepali Patro (Sudan Bhattarai Upadhyaya) in International Days .
May 3, 2021

Today, the 3rd of May is “International Press Freedom Day”, which is celebrated around the world by advocating for freedom of communication and all other issues related to it. Debates and different aspects of press freedom are also held plus observed on this day. The 26th General Assembly of the United Nations Educational, Scientific and Cultural Organization, UNESCO, held in Windhoek, Namibia, Africa, issued the “Windhoek Declaration” to promote independent media and a pluralistic press on 3 May 1991. The same declaration was approved by the United Nations General Assembly in 1993, declaring to celebrate this day as “World / International Press Freedom Day” every year. And, since then, the custom of celebrating International Press Freedom Day every year on May 3 has become a practice around the world.

As mentioned above, remembering the day on which the ratification and issuance of the “Windhoek Declaration for an Independent and Pluralist Press” was held at Windhoek, Namibia, the “International Press Freedom Day” is celebrated worldwide on this day.

Celebration of International Press Freedom Day started around the world since the year 1993 when it was approved by the United Nations General Assembly. This day is celebrated by advocating for the freedom of journalists and the press as well as for the protection of journalists worldwide.

Media, the Fourth Organ of State; its Freedom and Role

There is no doubt that International Press Freedom Day is an important day for every journalist, news writer as well as a news anchor, and all those involved in this profession.

Freedom of Thought and Expression

In addition, this day advocates on issues related to the freedom of the media, their voices, as well as all areas of the media and its issues. This day is celebrated by remembering and honoring the contribution, hard work, etc. of various media journalists who lost their lives gathering news even in the midst of risks ignoring the danger in the line of their duty.

In Nepal, Nepali journalists and related stakeholders have been This day is celebrated in Nepal since 1993, advocating for the freedom and security of journalists and the press.

The Supreme Federation of Nepali Journalists (FNJ), celebrates International Press Freedom Day with various slogans and programs every year. Apart from the three major organs of the country, i.e the judiciary, the executive body, and the legislature, the press is the most important and necessary.

History of Press in Nepal

If we dig into the history of the press in Nepal, it would not be inappropriate to say that Gorkhapatra was and is the first news-based magazine in Nepal. It was started by the then Rana Prime Minister Dev Shamsher on Baisakh 24th, 1958 B.S. Gorkhapatra, which started as a weekly magazine at the beginning of the first phase, three years later started its journey of publishing twice a week since 2000 B.S. Then, it started to be published thrice a week from the month of Paush B.S. 2003.

It can be said that the main purpose and motive behind the publication of Gorkhapatra was to glorify the Rana regime and its purpose was not to inform or educate the people in general. Although Gorkhapatra started its publication in 1958, it was not until Falgun 7th of B.S. 2017 that it started as a daily newspaper.

Federation of Nepali Journalists and Communication in Nepal

The history of the press though started with the Gorkhapatra period of that time, the present-day press and media, their development and freedom has indeed come a long way. And, the Nepal Journalists Association has also been established for the freedom of the press.  The Nepal Journalists Association was established in 2012 BS with the objective of raising a strong voice in favor of press freedom. The establishment of this association at that time was with a major task of raising a strong voice for a new political system and in favor of professional rights.

The Nepal Journalists Association (NJA) was writing in favor of an independent press and agitating against the then autocratic Panchayat system. In 2053 BS, the old name of the federation was changed and Maha (Supreme) was added and the old name was modified to “Supreme Federation of Nepali Journalists”.

From its earliest days, journalists affiliated with the federation have been advocating for press freedom, which still continues to this day. Journalists, at various times and periods, have not hesitated to sacrifice their lives for the freedom of the press.

Although the practice of celebrating International Press Freedom Day in Nepal has not been around for a long time, there are four main objectives behind celebrating this day. The first objective is to commemorate the establishment of the fundamental principle of press freedom every year, the second objective is to pay a heartfelt tribute to the journalists around the world who lost their lives in the course of professional duty, and the third objective is to evaluate press freedom globally. The fourth one is protecting the media from any kind of external attack on press freedom.

On the occasion of International Press Freedom Day, special slogans are decided every year. In that slogan, there is the inclusion of a purpose and future plans related to press freedom. However, the above-mentioned four objectives have been established and are unchangeable from the very beginning.

Various programs are organized on the occasion of Internationa Press Freedom Day. Various pressure programs are organized to ensure an environment of press freedom targeted for the state. Similarly, media personnel who have faced repression from the state at various times and for various reasons are being treated with respect, and pressure programs are being carried out to ensure an environment of press freedom from the state. Today, the press councils of most countries around the world have a tradition of issuing special press releases.

Every year, UNESCO conducts programs through its branches in many countries, focusing on the existing problems and challenges in the field of press freedom, with the participation of journalists, civil society, educational institutions related to journalism, and other stakeholders in the field.

In Nepal, organizations, including the Federation of Nepali Journalists, hold programs individually and collectively. The programs organized on this occasion, especially the programs related to press freedom, are important and the annual report of the federation is also made public on this occasion.

Freedom of the press in any country depends on its political system and conditions. Due to that, the political instability in Nepal even affects the freedom of the press. The right of one person or power is an obstacle to the freedom of another person or power, so the impact on others in the name of freedom must always be taken into account by those concerned. It is a person’s right to walk freely, but it is not his right to violate the freedom of other passers-by to walk on the road just because it is his right.

This World Press Freedom Day is celebrated every year by press freedom organizations, media professionals, and UN agencies working together to bring everyone together and assess the state of press freedom globally. At the same time, discussions are being held on the challenges in this area and their solutions.

Online Digital Media and Other Data in Nepal

Speaking of communication, in the current changing times, FM radio stations across the country are gradually displacing newspapers and magazines to some extent and taking their place. Talking about FM radio stations, it is seen that more than 300 FM radios have started playing in the Valley alone.

Everyone must have experienced that our habits like reading and taking notes are gradually disappearing by the grace of radio and television. In the same way, if we only see and hear but do not write or take notes, and if we do not write with our own hands, would not we also forget the sweetness of our own language, scripts, and language as well as grammar forever.

For this reason, writers, journalists, audio-visual journalists, newscasters, camera technicians, and every personality of the press, media, etc., all and every professional, dedicated to their profession on the occasion of this International Press Freedom Day must aspire to write as much as possible in their own language every day, that too with ones own hand. This seems to be very important to establish the dignity of this profession not only for the short term but for forever.

A heartfelt salute and warm greetings from the Nepali Patro family to all of these professionals who always put their lives on the line of duty to provide accurate, truthful and impartial news coverage in various fields of journalism. While news and information are the right of the people, the security of the press and their freedom is also our responsibility. Best wishes on the occasion of International Press Freedom Day to all readers and writers, viewers and presenters, listeners and readers from our entire Nepali Patro team. 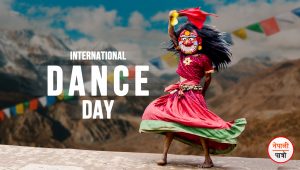