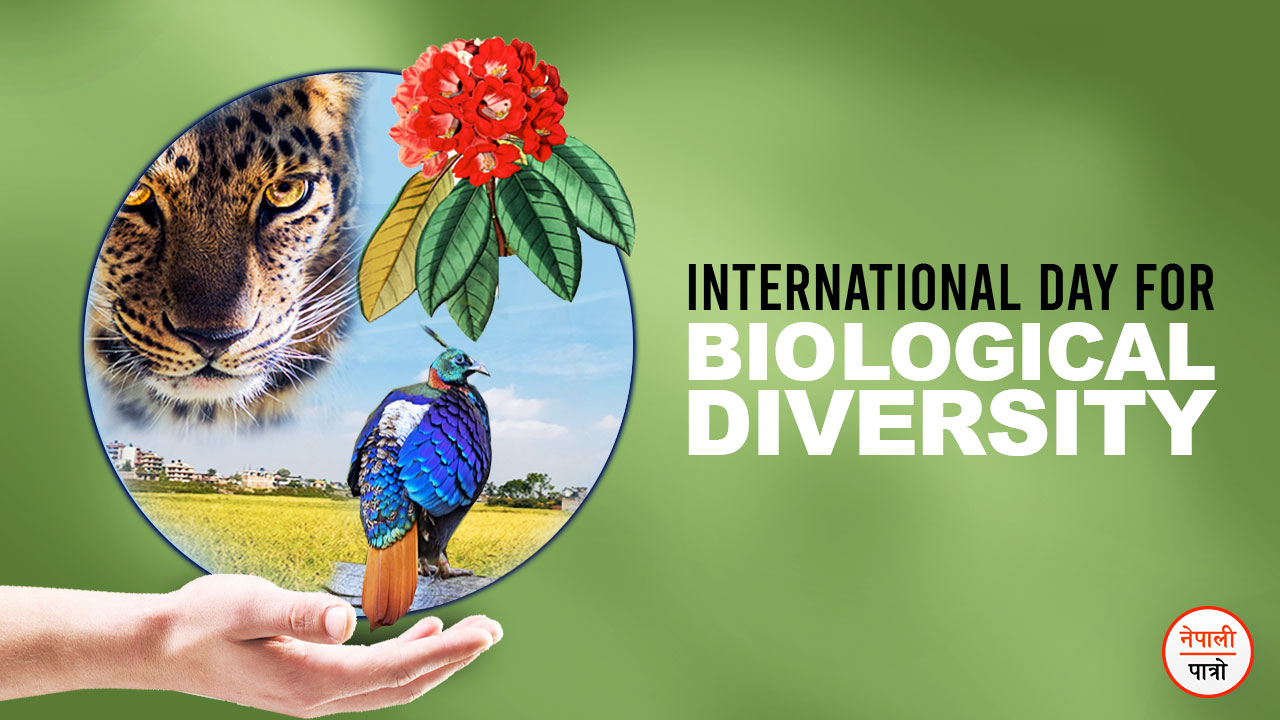 By Nepali Patro (Sudan Bhattarai Upadhyaya) in International Days .
May 21, 2020

On May 22, 1992, the Earth Summit convention was organized at Rio de Janeiro, Brazil, proposing the advancement for the Convention on Biodiversity, then onwards on May 22, 1994, the resolution was passed to observe and commemorate “International Biodiversity Day” every year on the International platform.

According to the Environmental Protection Act 2053 of Nepal, biodiversity in Nepal is defined as the diversity of ecosystems, species systems, and hereditary systems. Scientist and conservationist Raymond F.F. Dasman presented these issues in his book titled “A Different Kind of Country” in 1968. As per his book, the term “organic litata” when defined is used widely as well as interchangeably with words like “wildlife”, “biodiversity”, “primary species”, and is also used for the prosperity of different species found in the environment.

As per the book, Biolitera is generally formed as a brief enrichment of a geographical area, with some reference to a temporary problem. Types of species described include: –

There are three other indicators used by ecologists.

Alpha litta (alpha diversity) is detected by measuring within a particular area, community, or family technology center and by reducing the number of situational family systems (usually within species).

Beta litta (beta variety) is a pelita species in the middle of the family system; It involves comparing numbers and is considered a unique way of finding measurements for each family’s location systems.

Gamma Litta (Gamma Variety) is a special area for the overall distribution of systems in different family locations.

It cannot be denied that Nepal is one of the very few countries in the world with a very diverse biodiversity and the human quality is that it enjoys diversity without any doubt. Nepal is a landlocked country wherein the south-eastern part of Jhapa district there is a place called Kechna located only at a height of 60 meters above sea level whereas, in a short distance above it exists the world’s highest peak Mount Everest of 8,848 meters located in the upper northeastern part of the country.

Statistics show that there are more than 200 different species of mammals in Nepal. Apart from Lammergeyer and other species of birds entering Nepal in winter from Siberia, there are more than 800 species of birds in the country. Which is more than the numbers found in the whole of Europe. Talking about butterflies, most of the butterfly species are found in Nepal and over 600 butterflies of different species are here in Nepal. Because of this reason the country has become a center for butterfly research for scientists all over the world.

The main global elements of biodiversity destruction are climate change, endangered species, over-exploitation of natural resources, pollution, and urbanization. According to the Global Report, human activities were and are responsible for the loss of biodiversity, accounting for 75% of the terrestrial ecosystem. This assessment indicates that solutions exist but the implementation to protect biodiversity all over the world must not be delayed or put to halt.

There is no doubt that biodiversity is of great importance for the survival of human life and it should be protected with the participation of stakeholders and the general public with hand in hand. Conservation of biodiversity is not only possible by the government alone, the government can take the lead. But, the local community and the private sector need to support the government in formulating programs and policies by implementing them from their respective places performing their duties.

Every year on the occasion of International Biodiversity Day, planting trees (afforestation), sanitation programs et cetera are observed and organized in different places of the country. It is observed with various programs plus issues related to this day. But strange situations like the disappearance of trees planted one day and disappearing on the very next day do take place. Therefore, even the general public needs to pay attention to these issues. If not conservation will be a difficult act to perform so that it does not become a very bizarre issue.

Biodiversity is the living fabric protection of our planet and it underpins human wellbeing in the present as well of the future, thus its rapid decline threatens nature and people alike. Therefore, it will be meaningful and purposeful to celebrate such days only as long as the government and other concerned bodies pay special attention to public awareness and develop more awareness in each and every field connected to Biodiversity Day.  To Read this article in the Nepali Language please click here.