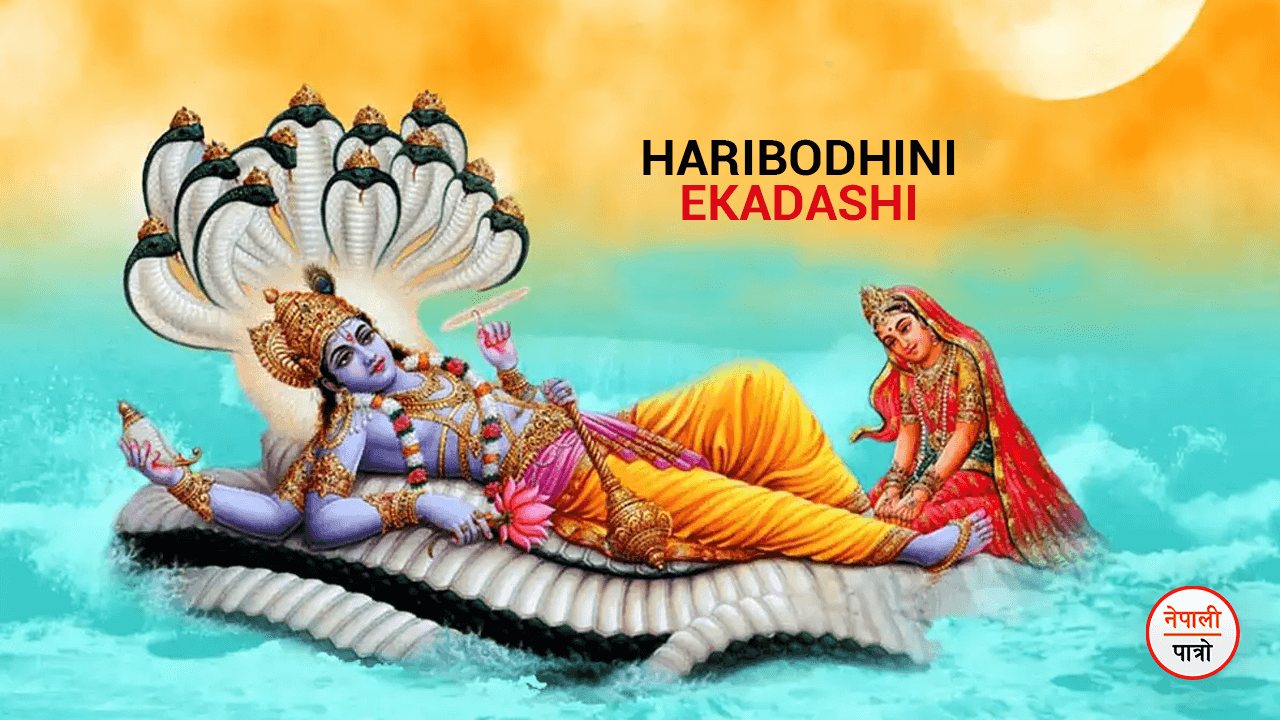 The Ekadashi date of the Kartik Shukla Paksha is called Haribodhini Ekadashi. ‘Hari’ means Lord Vishnu whereas, the word ‘bodhini’, comes from the word ‘Budha’ meaning metal, thus bodhini signifies waking up from sleep. According to the Puranas and the holy scriptures, Lord Shri Hari rests from Ashad Shukla Ekadashi for four months till Bhadra Shukla Ekadashi in Chhir Sagar on his bed of “Sheshnag” (bed of serpents), for four months, takes a right turn/ flip in his bed this day and wakes up.

As the god himself is asleep during this period along with the world, too special mangal (religious) acts as weddings, sacred thread ceremonies, hair cutting ceremony, the wedding of ficus religiosa trees (Pipal), initiation as the construction of a new house, etc are not done. The acts, religious or other deeds done during this period do not have the vision of god, as he is sleeping. Thus, the good merit and result cannot be obtained. Therefore, it is forbidden to start or do good karma/ deeds at this time. No auspicious dates for the above-mentioned deeds are mentioned in the calendar too for this particular time being. But, regular and routine work is to be done within this (chaturmas) quadrant, and no blame shall arise whatsoever. From Ashad Shukla Ekadashi to Karthik Shukla Ekadashi Sri Hari being in sleep, on the day of Kartik Sukla Dwadasi there is a scripture with methods to wake him up. Lord Shrihari, who has been sleeping during the four months (chaturmas), should be awakened using this mantra on Kartik Shukla Dwadashi.

(O Govinda Bhagavan, You have to leave your sleep and get up because the world too sleeps while you sleep and when you wake up, this whole universe rises along with its living being. So you had to wake up to wake the entire world).

After the Lord awakens in the month of Kartik, it is the first ordinance to marry the goddess Tulsi (Holy Basil or form of Laxmi) with God Damodar ( 367th Name of Lord Vishnu thus Krishna Himself). The Damodar- Tulsi should be married on Kartik Shukla Dwadashi date as long as possible and if interrupted then Damodar-Tulsi should be married on a date thereafter the sooner the better.

Chaturmas are the four months’ time from lord Shrihari going to bed till his awakening. Continuous worship of God throughout the chaturmas assures that all sins will be destroyed and one receives God’s blessings and mercy. When one fast on the basis of unselfish spirit Lord Hrishikesh is pleased and all the vows, desires of the person fasting, all the wishes, are fulfilled. According to the prophecy of Bhavishya Purana, the people who commemorate Lord Narayana fast during the Chaturmas remembering him, after death riding happily on a craft shining like a sun, resides happily in Vishnulok, until the great flood.

From the Ekadashi of Ashad Shukla Paksha, the four-month fast begins. However, after completing the Ekadashi fast of Kartik Shuklapaka, the fast is brought to completeness by methodically eating and drinking after the fast. Among the Ekadashis falling in between other Ekadashi, the importance of Shayani and Bodhini Ekadashi is stated to be of more importance. Ekadashi is the most virtuous day of the year, therefore these two Ekadashi are also known as Thuli Ekadashi (big Ekadashi). In the Ekadashi Mahatma, as well as the Ekadashi law, the law of obedience by the person performing it is mentioned in the Brahma Vaivarta Purana. Extreme Fasting is considered to be the best in Ekadashi fast, not consuming even grains. But fasting can also be done by eating fruits, sesame, milk, yogurt, whey, water, ghee, etc. Consuming grains like rice, wheat or other grains during Ekadashi fast is strictly forbidden. According to the Scriptures, all sins are settled on the grains on the day of Ekadashi. Physical conditions should be taken into consideration while fasting. Therefore, the evening meal is also considered to be prohibited in compliance with the Ekadashi.

The Ekadashi fast teaches the unity of thought, speech and action to move forward strong for one’s duties and responsibilities. Fasting during the four months (chaturmas) or in each of the Ekadashi motivates the development of self-restraint and determination, as well as increase in physical and mental health. That is why, the Ekadashi fast is meant to be taken by everyone, everybody and consistently.

Each and every sense of human being is linked to the mind/thought. The sense organs crave and long for sensuality. Word, touch, form, taste, and aroma are the subject of the sensory organs. The sensation of the senses, is not perceived by the sensory organs alone such as the ears, skin, eyes, tongue, nose, but it should be desired by the mind. The mind controls the subjective instinct of the senses too. Therefore, any act can be succeeded only by a united instinct of a clean mind and devoidless senses. Ekadashi, and similar fastings etc., plays an important role in this kind of success. The restraint or control of the eleven senses is an important aspect of the Ekadashi fast.

The eyes, ears, nose, tongue, and skin are the five sensory or knowledge organs, while the speech, the water, the foot, the paw, the anus and genital are the five action organs. These 10 faculty of senses along with mind makes 11 sensory organs. The Ekadashi fast is done to suppress the tendencies of these 11 senses, namely, the personal conduct, sensuality and to prevent the subject’s addiction to lust and to stop the negative attitude of the eleventh sense is the real purpose to take Ekadashi fast. Therefore, the Ekadashi fast teaches the senses to exercise restraint as well as to concentrate and advance in the field of material work.

After the Haribodhini Ekadashi when Lord Hari wakes up, the holy basil (Tulasi) sown four months before is methodically wed to God Damodar (Krishna). The concluding day of Ekadashi Brat i.e Dwadasi Tithi the wedding between Tulasi and Damodar takes place. After daily worship of Tulasi from the day it is sown, an special offering to God Damodar or Satya Narayan, tulasi is given as a bride to the hand of God Damodar along with special ritual. As during a wedding of a daughter, there is a special ritual of offering the daughters hand to the groom known as Kanyadan, visualising the hands of Tulasi and giving it to God damodar the wedding has to be performed as if giving away one’s own daughter.
The mantra to be recited while giving away Tulsi to god Damodar is as follows:

I am surrendering and giving the hand of Tulsi-like girl, adorned with golden jewelry and garments, ornaments etc in a Kanyadan to you Damodar i.e avatar of Bishnu as a groom.

“Till date I sowed, took care and raised Tulsi, as a girl, my child. Today, I am giving her to you lord by diligently decorating her as possible in my power.’ Reciting this, with holy resolution water in hand seated in front of the image of Satyanarayan, the resolution water should be released saying “Please Lord Bishnu be happy with my act of offering and please do accept the girl.” Tulsi’s hand should be visualized and made in contact with lord Bishnu. Then one should pray: “May I have a good merit of donating this Tulsi, may I receive salvation and pray that Tulsi be around me”.

After this, performing 108 fire worship (yagya) etc, alms should be donated.

Navanna Prasan (first of new rice and grains), Dhatri Pujan (worshipping gooseberry) and Ban Bhoj (Picnic)
There is a tradition of eating Nwagi (first eating of new rice/grains) by offering new rice to God on the day of Hari Prabodhini Dwadashi.

After entering the new paddy, barley, rice etc into the house, offering it to the gods and forefathers by making a holy fire offering, the house dwellers must say ‘From today onwards I receive this grain as an offering’ this adoption method is called “Agrayan Act”. With time the word, (Nawanna) eating new food got corrupted in the language form and now it is known as Nwagi. From Dwadasi till Panchami for the purpose of the yagya of Tulasi, Wedding of Tulsi, and for Nawanna Prasan etc auspicious timing need not be forecasted thus, all these religious karmas can and are meant to be done together. But, after Marga Krishna Pakchya Panchami all above mentioned karmas are to be done only after determining and forecasting of auspicious timing.

After making respectful offering of water to Damodar with the above mantra, begging pardon for mistakes done unknowingly Dhatri (gooseberry) must be worshipped with sandalwood, saffron reciting ‘ॐ धात्र्यै नमः…’ plus other 20 other mantras with flowers. There is a tradition of performing respective offerings of water with sacred thread on the right hand shoulder (savya).

Then a colorfull thread must be tied around the gooseberry tree reciting the following mantra:-

‘ॐ धात्र्यै नमः…’ Reciting this mantra, offering has to be made with mixture of rice and curd in four directions and light an oil lamp in eight directions. Then circumambulate the tree with the following prayer.

After praying like this, a bronze pot full of ghee containing gold must be donated. Thereafter, food should be cooked and eaten at the base of the same tree. This is known as Picnic / banquet these days.

At the base of the tree of gooseberry the offering to Damodar and Gooseberry with respective offering of water is done as there is a classical belief that this act is for the attainment of wealth, health and so on. The same tradition with time got corrupted in language as well as tradition or religion and Banbhoj (picnic) started. The main thing is the classical belief of dining at the base of the gooseberry tree, contains holy traditions, whereas, now picnic has become just a kind of entertainment program.

Thus, on the occasions with Haribodhini Ekadashi in the ensuing events, four months of the Ekadashi Fasting, wedding ceremony of Tulsi, Religious aspects of Nawann Prasan, Religious acts performed at the base of gooseberry tree and its worshipping, Respectful offering of water and picnic are all found in this ekadashi context. To Read this article in the Nepali Language please click here. 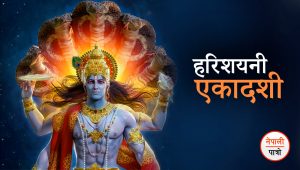