Every year from the date of Shravan Shukla Pratipada to Bhadra Shukla Pratipada, the Buddhist Newar community celebrates the Gunla festival. This whole month is considered as an opportunity to accumulate dhamma (religion). As per the tradition, in this festival, the Buddhists of all three communities of Hinayana, Mahayana, and Bajrayana go around circumambulating the Buddhist stupas, chaityas and monasteries to show their devotion to Lord Buddha and meditate on Lord Buddha.

According to Buddhist Literates and Culturologists, even before the construction of the Swayambhunath Mahachaitya, it was customary to circumambulate and serve the chaitya, during that time, it was known and called as ‘Gunla Dhamma’. According to the Language Genealogy, it is mentioned that King Bikramdev established the tradition of Gunla dhamma for the followers of Buddhism from Shravan Shukla Pratipada to Bhadra Shukla Pratipada for a period of one month. In Nepal Bhasa, the word ‘Gun’ means nine and ‘La’ means month. Therefore, as this festival is celebrated nine months after the beginning of Nepal Samvat / Sambat, the transitions of this month are called Gunlathwa and Gunlaga.

In ancient times, according to the Swayambhu Puran, the valley of Kathmandu was a great lake. At one point, the ascetic Bipassu (Vipassī) Buddha came, and have had planted a lotus flower seed in this pond before his departure. After that, when the lotus flower blossomed, Swayambhunath appeared on it as the Dharmadhatu Jyoti. To get a glimpse of Swayambhunath with Dharmadhatu Jyoti that originated from it, Maha Manjushri came from Mahachin (these days China) as a pilgrim. He arrived at Chobhar and settled his two wives Varada (Kesini) and Mokshada (Upakesini) on the right and left side of the Chobhar hill, and using his Khadga (a big sharp sword) he cut the gorge in the hill so that the water can flow out from the lake. After the water receded, Manjushri established a city called Manjupattan.

After the establishment of Manjupattan, the regular religious service of dhamma was started on the hill where Jyotirup Swayambhu originated. This was called Chaitya Seva / Sewa. There is a legend, that the Chaitya service was called ‘Gunla Dhamma’ after the construction of Swayambhu Mahachaitya by Dhamma Guru Shantikaracharya, a religious leader from Mahayana, in the place where Swayambhu was enthroned as a light.

During the Gunla festival, devotees bathe early in the morning, purify themselves, playing traditional instruments, recite hymns, and circumambulate the stupa, chaitya and gumba chanting mantras. The Devotees of Kathmandu especially, visit the Swayambhu Mahachaitya during this festival whereas those who are not able to visit Swayambhu go to other nearby Chaityas, Gumbas, and Stupas, etc. to earn merit. On this occasion, of Gunla Parva (festival) a fair is also held in Syambhunath for a month. After the devotees visit and circumambulate the Swayambhu Mahachaitya, there is a tradition of visiting the Bijayashwori temple located near Shobha Bhagwati temple and worshiping Seto (white) Matsyendranath at Kel-Tol as well.

In this festival, the devotees with the offering and circumambulating the Swayambhu Mahachaitya wish and pray for all the relatives who had passed away within this year to live in Sukhavati Bhuvan (The Pure Land of Amitabha). It is customary for the family to pray in Buddhist monasteries, Chaityas for a month, and to perform charity plus serve the needy by giving alms, etc. In addition to the lighting of lamps in various Chaityas, Biharas, and Monasteries, different spiritual programs such as meditation, sadhana, dhamma songs/music, salvation lessons, dhamma discourses, and dhamma sermons are conducted. In this festival, traditional music instruments such as Dha:baja, Nekubaja, Damokhin, and other cultural musical instruments are played throughout the festival while circumambulating of Chaityas, Gumbas, etc, as there is a popular belief that this will increase harmony among one another, as well as peace of mind, happiness in the family and the attainment of special virtues. After the feast and merriment on the day of Bhadra Shukla Pratipada, the Gunla festival comes to an end. 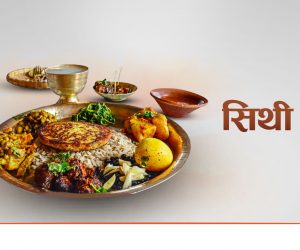