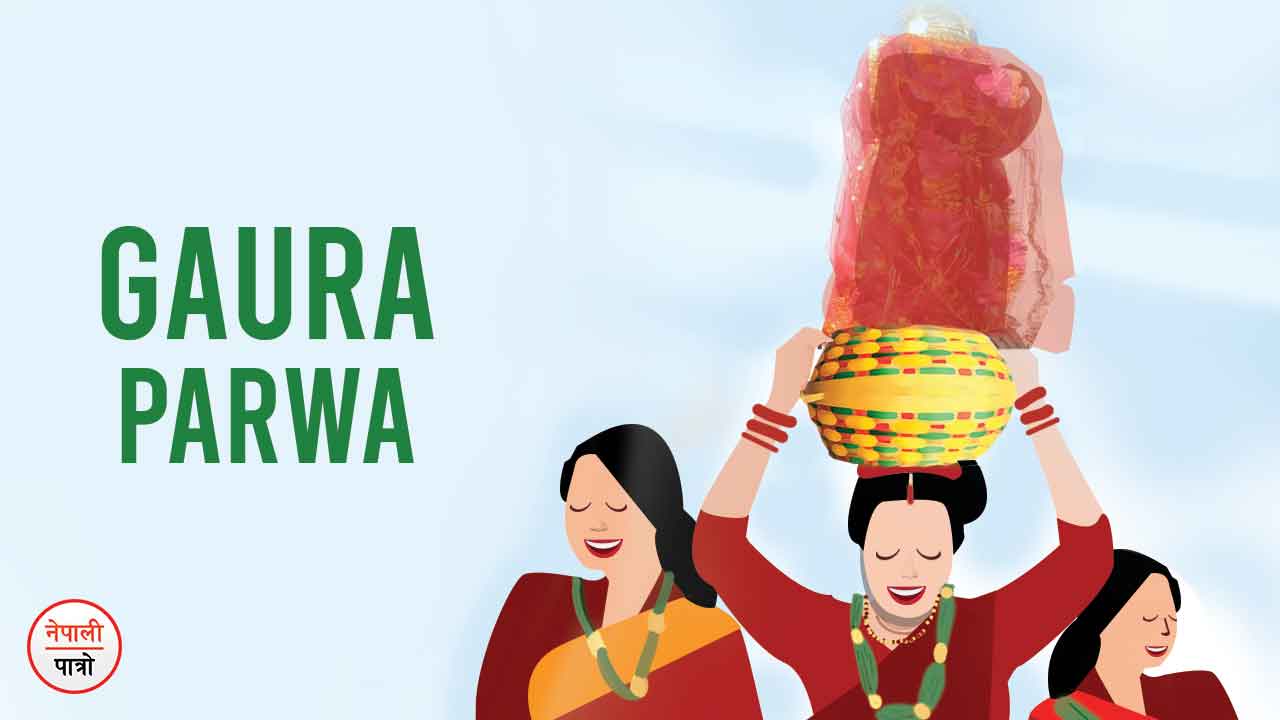 Gaura Festival: Gaura festival/parwa is one of the countless festivals in the western and in the far western region of Nepal. This festival begins on the fifth day of the month of Bhadra i.e. Biruda Panchami. Gaura is a great festival celebrated especially by women in those parts. It is said that the name of the Gaura festival is derived from the name “Gauri” another name of Goddess Parvati, daughter of Parvatraj (Himalaya). Gaura festival is one of the important festivals after Bada Dashain in the country.

In different places, the Gaura festival is also known as Gamra, Gohra, and Gawara. In the 13th and 17th chapters of the 6th Skanda of Devi Bhagwat, there is a story of women from the Bhrigu dynasty worshiping Gora / Gaura Devi in ​​a ritualistic manner which makes the glory of this festival even clearer.

Gaura Festival, starting on the date of Biruda Panchami, according to astrological calculations, some years fall on the Krishna Pakchya and in some during Shukla Pakchya. Gaura falling on the Shukla pakchya is called Ujeli-Gaura and the one falling on the Krishna pakchya is called Aneri (dark) Gaura. Ujeli-Gaura is considered auspicious for married women fasting for the first time. Gaura Parva or Gaura Pujan and Haritalika Teej celebration of women serves to deepen the relationship between men and women in society.

Himalaya’s daughter Parvati worshiped Lord Shiva while fasting to get him as her husband, and due to its effect, she got married to him. This incident is mentioned in Himbat Khanda and some Purans that Gaura started from that same time.

Gaura festival is celebrated for five consecutive days with its rules and regulations. The date of this festival starts from Chaturthi, followed by Biruda Panchami, Surya Shashti, and Gaura Saptami Fast on the seventh day and lasts till Ashtami.

For the Gaura celebration, with a pure heart and clean body on the day of Chaturthi, women prepare and mix five types of grains (black lentils, gahat, gurans, corn, and wheat). These five kinds of grains called Biruda prepared in this way is also taken as a symbol of Lord Shivas’ Panchakshara / Panchakshari mantra. It is a general custom to sing Mangal Gaan (auspicious songs) while preparing Biruda. The Biruda prepared in this way is considered a special offering made to Jagat Janani Jagdamba Gaura and it is traditionally accepted as a prasad.

on the day of Biruda Panchami, women wake up in the morning, take a bath, and soak Biruda (also known as Quanti in other places) with the water of a local well, or Pandhero called Nwalo in the local dialect. Copper or brass vessels are cleaned, purified, and decorated using cow dung, akshata (rice), and dubo (Bermuda grass), and biruda is soaked in it.

On the day of Gaura Saptami Brat, women fast all day long. On this day, the idol of Goddess Gaura (Sanja) is brought home from the field accompanied by music. Gaura Devi and Lord Shiva are worshiped in a Vedic manner in the presence of a Brahmin on this same day. The idol of Lord Shiva is made of wood or stone.

On the day of Pratipada tithi, a special place of the house where Gaura is to be established is cleaned and clean soil is brought in for this purpose, and the house is purified. On the second and third days, women wash the clothes, etc. On the fourth day (Chaturthi) they prepare and clean the Biruda. On the day of Biruda Panchami, the Gaura festival is formally started by soaking the Biruda cleaned on the Chaturthi date. It is a custom to wash the soaked Biruda on the sixth day i.e Shasti.

After fasting on the seventh day, women adorn the Gaura Devi’s figure with vermilion, glass beads known as pote, gunyu, cholo, fariya, a thread called Dubdhago, etc. After adorning and worshipping the figure they close the fasting but only after a donation is made to a Brahmin. On this day, it is believed that a fasting woman must wear a Dubdhago around her neck. Dudhago is made up of five colors namely red, yellow, black, green, and white.

Just like men, wearing the Janai, women wear dubdhago around their necks. The act of wearing Dubdhago by women is also one of the main objectives of the Gaura festival and women change it on this festival just like men change Janai on the Janai Purnima day.

After that, all the women observing fast line up in a circle, sing and dance Deuda songs in the local folk tunes. All the fasting women sing and dance with the idol on their heads while some of them just touch it with their heads so as to fulfill the ritual.

In this way, after the completion of the dancing and singing ritual along with the idol, as the final step of the celebration of Gaura Pujan, the fruits, flowers, etc. are placed on a big cloth and thrown towards the sky five times and in all four directions. The process of making offerings in this way is called Fal Fatkaune.

During the Fal Fatkaune ceremony, all the women spread out their veils, handkerchiefs, etc. in the hope of receiving fruits or prasad. If good fruit is obtained during the process of fal-fatkaune, it is believed that it will be auspicious throughout the year, therefore everyone hopes to get it.

It is an old belief that if the new bride or woman without a child gets a good fruit in her hand, her child’s wishes as well as other wishes will be fulfilled. In this way, the Gaura festival is celebrated from Baruda Panchami to Ashtami tithi and Gaura immersion is done on the next day or on different days according to the auspiciousness.

After the completion of the ritual of the Gaura festival, the date of its visarjan/immersion is fixed for three to five days. During the immersion, the male plays musical instruments and the woman sings the Gaura-Maheshwar song known as Fag. Then the gaura figure is taken to a waterbody or pipal tree for its immersion.

Gaura festival is celebrated in the western part of Nepal and also in areas such as Uttaranchal and Uttar Pradesh of India in the same name.  In South India, on the other hand, this festival is celebrated in the name of the Ganapati festival with various religious worship and spiritual programs. Since the Gaura festival and Deuda culture are the identities of not only the far west but also the whole nation of Nepal, it is the duty of every citizen and region of the country to promote it. On the occasion of the Gaura festival, Nepali Patro sends its best wishes to all our readers and users. To Read this article in the Nepali Language please click here.