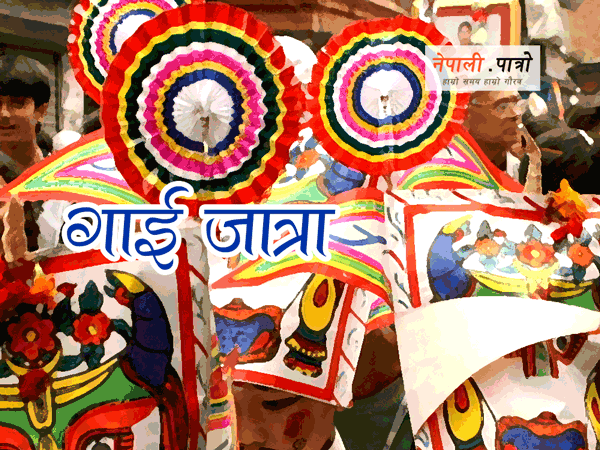 Gai Jatra is a National Cultural festival celebrated in Nepal. Since this festival is originated from the Newari culture, it is celebrated especially with special significance in the valley of Kathmandu, and in other cities where the Newar community lives. The Newar community has a cultural tradition of celebrating Gai Jatra in the honor and liberation of the deceased forefathers and relatives who had died within this year. This festival is celebrated every year on the day following Janai Purnima i.e. from Bhadra Krishna Pakchya Pratipada till the day of Ashtami.

According to historical evidence, during the Medieval Period, King Pratap Malla (1624–74 A.D), a Malla Dynasty king, from Kathmandu established the custom of celebrating Gai Jatra. He organized the procession of Gai Jatra to go around the city to show the people the reality that the world also was suffering like him and with an intention to calm the bereaved mind of his queen from the death of their son. When she saw the relatives of each deceased one in the guise of cows coming out of their houses and participating in the procession, the queen’s grief was lessened to some extent. However, since just this procession did not calm the queen’s mind entirely, then the king managed to make her laugh by presenting various comedies and satires programs, therefore, the legend has it that since then, it has been the custom to celebrate Gai Jatra every year as per the king’s order. There is still the tradition of performing Gai Jatra in the same place i.e. in and around the Hanumandhoka Palace area where the royal palace and court were located at that time.

Gai Jatra is called ‘Saparu’ in the Newari language/ Nepal Bhasa. Thus, as ‘Sa’ means ‘cow’ and ‘Paru’ means ‘Pratipada Tithi’, Saparu is a cow festival celebrated on the Pratipada date. In Hinduism, the cow is worshiped as the goddess of devotion and goddess leading towards salvation. As mentioned in the Garud Puran and the Padma Puran, it is believed that the gates of Yamalok will open only after one’s cow journey has been performed during the Gai Jatra procession in the earth. There is a religious belief, that by taking the cow in the procession around the city during the Gai Jatra, the deceased shall be able to cross the Baitarani river by holding the tail of the same cow and there shall be more ways towards heaven.

In the process of celebrating the Gai Jatra procession, if possible a cow and if one does not find a cow, the children are adorned as the cow and/ or different deities and they are taken around the city in the guise of cows and various deities. From early morning today, on the occasion of the festival, Gai Jatra processions can be seen in the Kathmandu Valley and in the main cities of the country.

Today, it is also a trend to sing compassionate songs and lines of Ramayan for the peace of the deceased. And, comedians also try to make their grieving relatives laugh. In this way, in one hand people wish for the salvation and welfare of the departed soul during Gai Jatra while on the other hand, this festival also inspires one to forget the pain and grief of losing relative or close ones and return to Karma Yoga (daily routine).

The high-spirit of this festival is enhanced by playing various typical musical instruments, through cultural dances and different Newari cuisine add up to the liveliness of the festival. As this festival is one of the important and famous festival inside the Kathmandu valley, this day is observed as a public holiday also inside the valley.

In recent times, the festival of Gai Jatra also has been established as a festival to express different kinds of truth through different comedy programs, etc. Nowadays, on the occasion of this festival, various newspapers, and magazines publish special issues consisting of comedies and political satires whereas comedians too have been pointing out the distortions, inconsistencies and irregularity existing in the society and the nation through different satirical comedy.