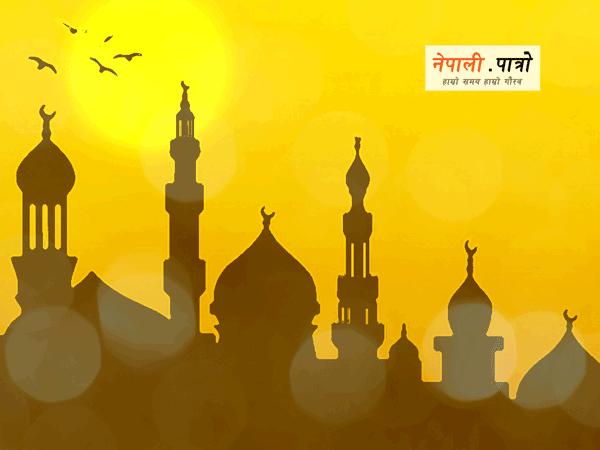 Eid al-Fitr. On behalf of the Nepali calendar family, we extend our warmest greetings and good wishes to all the Muslim brothers and sisters on this auspicious occasion of the holy festival of Eid-ul-Fitr, thanking Allah for providing good brotherhood, happiness, peace, and prosperity everywhere in the entire world.

Eid al-Fitr is being celebrated today on the last day of the ninth month according to the Arabian calendar, which is a lunar-based calendar. Todays’ festival Eid al-Fitr is known as Eid ul-Fitr too. The celebration depends on the sighting of the lunar crescent moon during the ninth month of the Arabic or Islamic calendar. During this festival people happily distribute alms, food, and other necessary daily objects et cetera to the poor and needy people. All the Muslims of all classes celebrate this day, and they celebrate it according to one’s capacity by consuming good food and sweets, etc.

Eid al-Fitr or Eid ul-Fitr also called the “Festival of Breaking the Fast”, is a religious holiday celebrated by Muslims worldwide which marks the end of the month-long dawn-to-sunset fasting of Ramadan. This religious Eid is the only day in the month of Shawwal (Shawwal is the tenth month of the lunar-based Islamic calendar). The date for the start of any lunar Hijri ( a lunar calendar consisting of 12 lunar months in a year of 354 or 355 days used to determine the proper days of Islamic holidays and rituals, as the annual period of fasting and the proper time for the Hajj, etc) month varies based on when the new moon is sighted by local religious authorities at different places, thus the day of celebration also varies by locality.

Eid al-Fitr was originally started by the Islamic prophet Muhammad. According to certain traditions, these festivals were initiated in Madina after the migration of Muhammad from Mecca. A well-known companion of the Prophet, Anas has narrated that, when the Prophet arrived in Medina, he found people celebrating two specific days in which they were entertaining themselves with recreation and enjoyment. Seeing thus, the Prophet remarked that Almighty has fixed two days of festivity and they are better than those you all are following. Therefore he told them to celebrate Eid al-Fitr and Eid al- Adha, as these were better ones for the celebration. Thus started the celebration of Eid al-Fitr as told by the Prophet himself.

Before the end of one month of Roja fasting, the Muslim community gathers at the place of Idgah and recites Nawaz, praying to Allah for the happiness of the entire human without anyone having miserable life or suffering. After that, good wishes are exchanged by embracing each other. This festival is considered as a festival that conveys and shows the message of “Unity in diversity” to the entire human race. In order to increase brotherhood and to awaken the spirit of benevolence in everyone, during the festival as per the rule people donate food and money to those who lack them. In this way, observing Roja (Fasting) on this occasion of Eid people pray to Allah to make this world, the world of equality for everyone, and dedicate one’s life to Allah.

Traditionally, Eid al-Fitr begins at sunset on the night of the first sighting of the crescent moon. But, if the moon is not observed immediately after the 29th day of the previous lunar month (factors being blocked by clouds or if the western sky is too bright when the moon sets), then the holiday is celebrated the next day. The date of Eid al-Fitr is always the same in the Islamic calendar, but in the Gregorian calendar, it falls approximately 11 days earlier each successive year, because the Islamic calendar is a lunar calendar whereas the latter being a Solar calendar. Therefore, if the Eid falls in the first ten days of a Gregorian calendar year, there will be a second Eid in the last ten days of the same Gregorian calendar year. Eid al-Fitr is celebrated for one to three consecutive days, depending on the country. It is forbidden to fast on the Day of Eid, and specific prayers are recommended for this day.

The Eid prayer is performed in the congregation as in open areas like fields, community centers, or mosques. The Eid prayer is followed by the sermon and then an appeal asking for Allah’s forgiveness, mercy, peace, and blessings for all living beings living across the entire world. The sermon instructs the Muslim community to perform rituals of Eid, such as the Zakat. The sermon of Eid takes place after the Eid prayer, unlike Friday prayer of each week, which comes first before prayer. After the prayers, Muslims visit their relatives, friends, and acquaintances or hold large communal celebrations in homes, community centers, or rented halls and observe the Eid al-Fitr with great zeal.

As Islam is represented by several major branches like Sunni, Shi’a, Ibadi, Ahmadiyya, and Sufism, and as all of these branches have their own tradition of celebration of Eid al- Fitr the celebration might vary according to the branch to which one belongs.