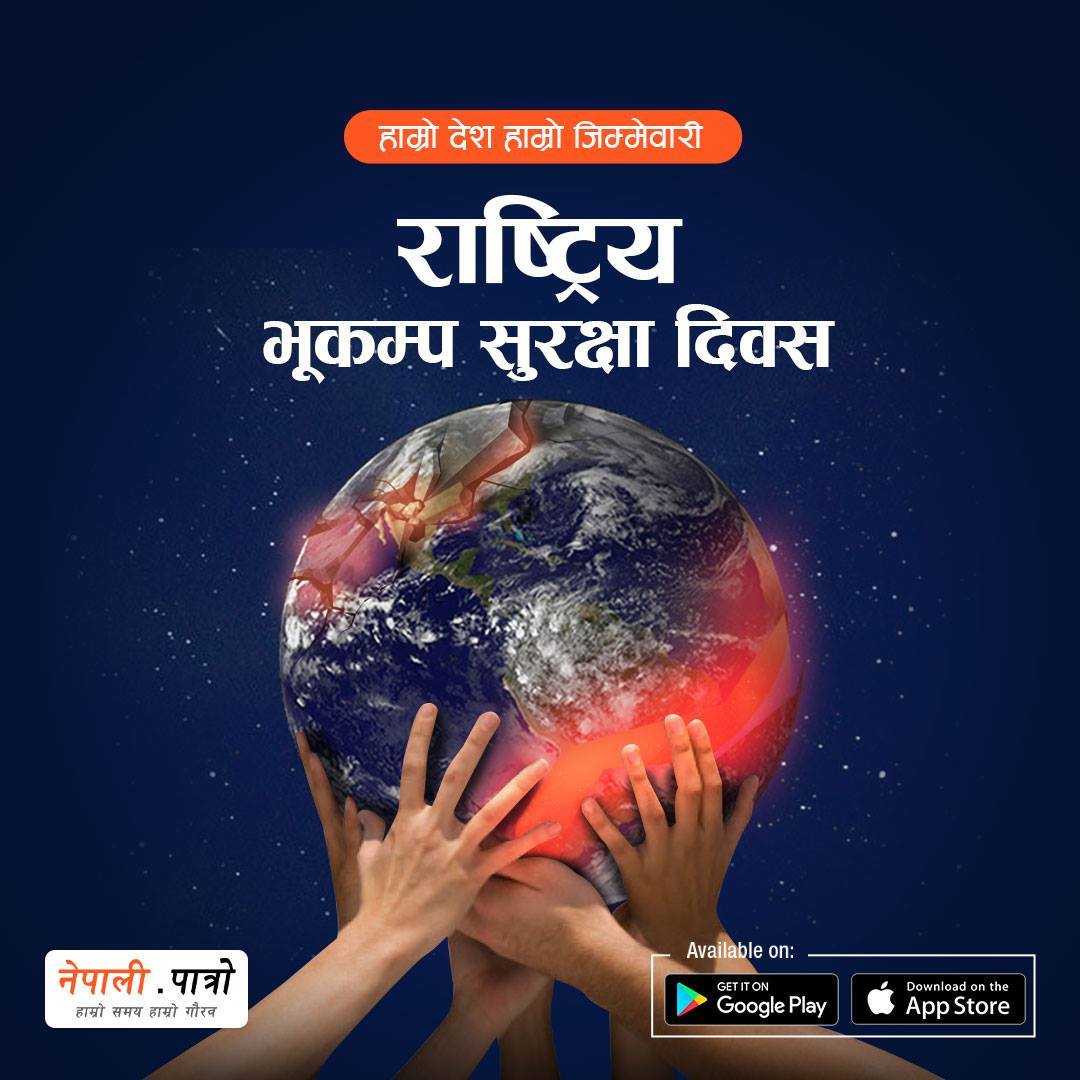 The “National Earthquake Safety Day” is being observed and celebrated across Nepal today. Many small and big Earthquakes have occurred in Nepal since a long time ago at different times. The Earthquake of 2045 B.S, and the Great Earthquake of 2072 B.S, are some major earthquakes of recent times whereas, while talking about earthquakes in this Country much has been said and talked about the great earthquake of 1990 B.S. in which many people lost their lives.

Nepal ranks 11th in the world in terms of seismic risk or in other words earthquake zone. In terms of earthquakes, Nepal is situated in a more active zone or earthquake-prone country than some other countries, such as Japan, China, Indonesia, Iran, Turkey, and Italy. The main reason behind this phenomenon is because of the collision of the African tectonic plate with the Eurasian tectonic plate millions of years ago thus, the Himalayas originated and there is constant friction and movement between these two plates. During this constant movement and friction, if there is a situation where the rock of a place moves, cracks, or blows at some point, then an earthquake occurs. Earthquakes have a long history in the world. According to the records of earthquakes kept in our country, the first earthquake occurred during the reign of King Abhaya Malla on June 1, 1255 (1198 B.S), which had a magnitude of 7.8 Richter scale which killed the king and wiped out one-third of the population of Kathmandu at that time. According to these records, Nepal has been experiencing at least one major earthquake every century since then. This means that even before the earthquake that killed Abhaya Malla in 198 B.S, there were earthquakes that may not have been recorded.

Frequency of Earthquakes in Nepal

In this way, in Nepal every 80 – 90 years to 100 years, there are occurrences of earthquakes with a magnitude 6 to 9 or more than 9 on the Richter scale, and even smaller ones on the Richter scale, which are not given much importance by the people. However, earthquakes are not only a problem in Nepal but are a kind of natural calamity that causes misery to the entire world at different times but, it is not in the hands of the human race to control it. One of the main reasons for so many earthquakes in Nepal is the origin of the Himalayas after the African tectonic plate collided with the Eurasian tectonic plate and the constant friction between these two plates resulting in earthquake waves. This is the reason behind the occurrence of small or bigger earthquakes occurring in our country frequently and big earthquakes occurring every 70-80 years to 80-90 years.

In remembrance of the big earthquake of B.S. 1990, “National Earthquake Safety Day” is being celebrated today with an aim of informing the general public about the earthquake and how to save oneself as well as others in these situations. Earthquakes are an absolute natural disaster that cannot be prevented, but we can protect ourselves from the potential dangers it creates. Because earthquakes themselves do not kill us, therefore if we take precautions during and after the earthquake, damage from the earthquake can be reduced to some extent. Usually, the human injury and death caused by earthquakes are because of people jumping out of a window, balcony, or high place out of fear during an earthquake, or getting trapped under the heavy boundary walls or walls of a house we have built or from others walls, etc around us. A big earthquake of 2072 B.S. i.e 25 April 2015 of magnitude 8.7-8.8 Richter scale hit Gorkha with the epicenter as Barpak and hypocenter at the depth of 8.2 km at NST 11:56 a.m. Gorkha is located 80 kms directly from Kathmandu and 180 kms by road.

This earthquake killed at least 9,000 people and injured more than 22,000 people. Though the epicenter was reported below the Barpak plateau in Gorkha, the tremor was felt heavily in Nepal, Kathmandu, and its surrounding till some towns in India and Bangladesh. The next day, again in the northeast, with the epicenter at Sindhupalchok another tremor occurred with a magnitude of 6.7 Richter scale. Around 100 or more aftershocks of these earthquakes were felt for almost a whole year or more. Immediately after the main earthquake of the first quake, a series of aftershocks began, at intervals of 15 to 30-35 minutes reaching up to the magnitude of 6.6 Richter scale.

The point of origin below the surface of the earth’s core is called the hypocenter and the center of the earthquake above the earth’s surface is called the epicenter of the earthquake. This quake triggered a massive avalanche on Mount Everest, Chomolungma, killing around 22 people. This quake marked the date April 25, 2015, as the most dangerous day in the history of the Himalayas. It is also reported that the second day’s quake of magnitude 7.3 Richter scale left 250 persons missing in the Langtang Valley because of a massive avalanche that occurred due to the tremors.

The earthquake devastated entire villages in many districts of the country and left thousands of Nepalese homeless. Numerous monuments listed under the UNESCO World Heritage Site including Kathmandu Durbar Square Complex, Patan Durbar Square Complex, Bhaktapur Durbar Square Complex, as well as many ancient and historically significant temples, like the Changu Narayan Temple, were severely affected and the World Heritage Sites such as the Boudhanath Stupa and Swayambhunath Stupa too were damaged by this tremendous earthquake of the decade. Much damage was caused by this earthquake as it also destroyed lots of very ancient and historically important buildings around the heritage sites area. Dharahara, the nine-story tower of 61.88-meter-high, also known as the Bhimsen Stambha (Tower), was also completely destroyed by the earthquake on the first day i.e. 25 April 2015. This tower was a major part of the architecture of Kathmandu valley recognized by UNESCO. Dharahara (Bhimsen Stambha) was built-in 1832 A.D during the reign of (“Mukhtiyar Bhimsen Thapa” mukhtiyar meaning equivalent to the Prime Minister) Bhimsen Thapa consisted of 11 floors but 3 storeys were destroyed by the 1990 B.S leaving it to 9 storeys only.

The quake dried up the sources of water in many places, whereas many new springs appeared and water started coming again from the dried-up Dhunge Dharas (stone taps). Landslides are still going on in many places due to cracks that occurred during the tremors in the mountainous region where there are many human settlements, which still is causing human and property losses. It was common to see huge cracks in roads and highways in many parts of the country as well. The main reason behind the cause of loss of so many human lives, human settlements as well as structural damage or so much impact on the human settlements is certainly the incorrectly built physical structures and infrastructures. In the same way, it is very likely that many people might have been able to save themselves during the quake if they would not have believed in unreasonable and irrational misinformation, such as hiding under a table, hiding under a bed, or leaning against the wall, etc. Because there were cases when people who were in the open air outside when felt the earthquake ran inside their house to hide under the bed or a table. Thus, if the people have had correct information as to what to do in this kind of earthquake, lots of life might have been saved too.

Various geologists, architects, and experts had been warning for decades that Nepal is in the grip of a deadly earthquake due to its geology, urbanization, and architecture. However, the government’s disregard for such warnings is one of the main reasons for the devastation. At the same time, it is important for all levels of government to focus on building earthquake-resistant structures. Older houses that cannot withstand earthquakes should be made earthquake-resistant if these structures are historically significant and are in need of such maintenance. In the same way, it is also obligatory to stop the indiscriminate fragmentation of lands and building settlements without any rules and regulations.

In these kinds of programs, the information about earthquakes should be widely disseminated to each and every household according to the time and situation as to how to stay really safe in the event of an earthquake among the people in general, then only we can be sure that this “National Earthquake Safety Day” will be truly meaningful and fruitful. Natural disasters cannot be prevented, but advance preparations can surely be made. Let us all be careful, be safe from the earthquake, and in an event let us save other lives too. To Read this article in the Nepali Language please click here.