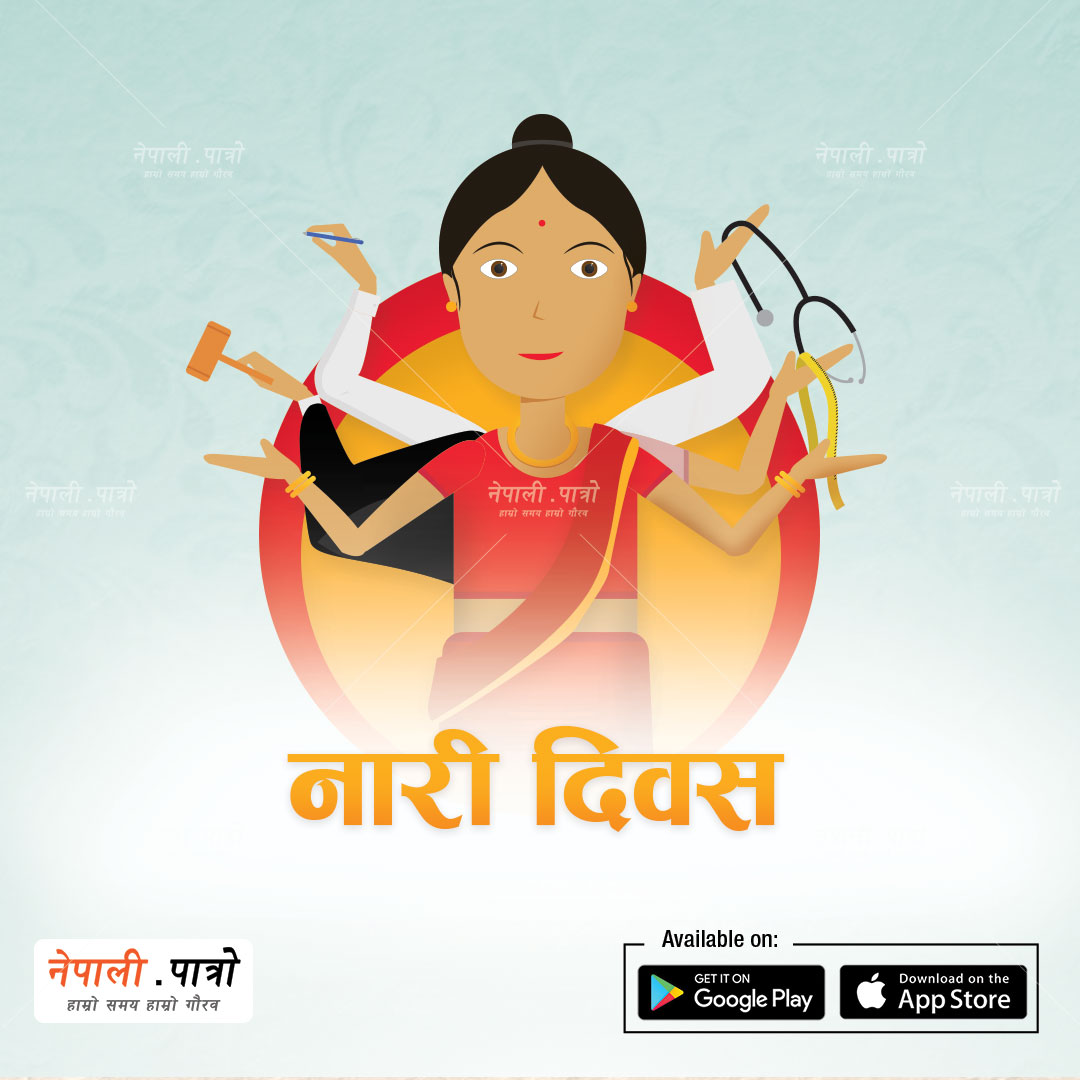 “World Women’s Day” or “International Women’s Day” falls on the 8th of the month of March every year according to the English or Gregorian calendar. On the occasion of this very important day, on behalf of the “Nepali Patro” family, we would like to express our best wishes and respect to all the women, including sisters, mothers, grandmothers, and all the women around the world. This Day is a day dedicated to women.

There are various documents available which can be found according to which, at the very beginning of this day’s celebration, this day was used to be called “International and World Hard-Working Women’s Day”.

But, with the passage of time, as the practice of celebrating this day gradually spread on in various International Countries, it can be said that the name also changed to “World Women’s Day”.

Women’s day is celebrated with grandeur in almost all the countries of the world including Nepal with slogans for the upliftment of women’s power and official equality in all sectors.

On this occasion, of Women’s Day a kind of “International Culture and Ritual” has also been developed, according to which “World Women’s Day” is celebrated with various activities and programs all over the world.

As the world draws to the latter half of the 21st century, nowadays every nation in the world is working to unite every woman’s right as well as their power in the world. All these nations are becoming more empowered and conscious through relentless efforts, for the continuation of World Women’s Day as an important celebration.

And, in order to fulfill the above-mentioned objectives, as it is necessary to move towards a new dimension with full confidence, thus it can be seen that all of the countries in the world are indeed doing so.

Celebrations of Women’s Day in Nepal and around the World

Various governmental and non-governmental organizations in the world related to women’s rights organize various powerful programs on the occasion of this day.

Such programs are celebrated all over the world, including Nepal, with peaceful slogans and rallies, gatherings, and seminars, advocating for a number of powerful campaigns to end gender inequality, domestic violence against women, and various inequalities between men and women.

In Nepal too, various programs are organized and observed on this day to ensure the rights and interests of women, as well as to ensure equal opportunities for men and women in each and every field.

In the same way, it can also be seen that conscious and educated people from all walks of life are working together for the fulfillment of these objectives as well. This day has also been declared as a public holiday for women in Nepal and some other countries of the world.

At present, works are underway so as to bring women under the concept of equal social rights not only in Nepal but all over the world. All organizations with various women’s rights activists of the world working with an aim to empower women is a very well-known issue these days.

In this way, for the political, familial, educational, and other rights of women, all the organizations including governmental and non-governmental with their responsibility to empower the women are working closely together with Women’s Rights Activists.

On this day, on the occasion of Women’s Day, various programs are organized by governmental and non-governmental organizations as well as women’s rights activists and the general public as well, by organizing rallies, etc. carrying placards related to women’s rights from various places of Kathmandu and beyond.

On the occasion of this Women’s Day, we Nepalese can never ever ignore the fact that we have already chosen women not just in other levels but even at the topmost leadership level of the nation as well, i.e. the second President of The Peoples Federal Republic of Nepal.

But, though we have already chosen a woman at the leadership level of the country, due to the weak laws, legal provisions, and the centuries-old patriarchal and gender structure existing in Nepali society, many incidents of violence against women are made public in the news media on a daily basis.

Such incidents are mocking all of us Nepalese, including the lawmakers, etc. while we are celebrating “Women’s Day” programs today. Not only that, there are many examples that can still be seen, where these kinds of cases or incidents are being hidden or suppressed under various masks and political forces amidst the legal difficulties and various obstacles that still linger in the society.

Today, on this day let us unite and pledge to prevent such heinous crimes forever in this country. Let us all dedicate ourselves to women’s rights, joining hands with human rights activists, organizations, lawmakers, law-abiding people, and most importantly “the state” with all Nepalese people in general.

Women and men are considered as two wheels of a chariot, i.e. a chariot cannot run on one wheel only. These kinds of examples are taught, even written as essays in the school.

But, when it comes to practical teaching some lessons as “My Family” as per the curriculum, children are still being taught by portraying parents in a paradoxical way for example “Baba goes to the office and mother does the housework or is a housewife”.

While most of the schools have more female teachers compared to male teachers especially for the smaller children. Looking at these existing paradoxes is not there a serious situation where these students might get confused as the reading, writing, essays, and lessons do not match with each other?

Nowadays, it has slowly but already started a custom for men to do housework and women to do outside work. For this reason, when educators are preparing the new curriculum, should not they also be paying attention to these new customs according to time and situations as well?

Otherwise, if the children’s brain is imprinted by those themes as of the essays, then there is a huge possibility that the next generation would also have the mistaken understanding that woman’s place is in the kitchen and men work outside.

And, surely this can create a problem more complicated than we have imagined so far, therefore the educators and curriculum makers must focus on these issues as well while creating a curriculum.

As per the context of the essay, men and women are equal and the same, the work done by one should and can be done by the other too. This information, or to be precise “The Right Education” has to be propagated to the children right from the beginning of the school, included in the curriculum as well. The result of this will be producing a whole new bunch of generations with an understanding that men and women are equal.

This is not just a random thought but it is something that cannot be denied. Because if this is implemented then this new upcoming generation will have an understanding that there is no difference between men’s work or women’s work etc.

So, come, today on this important day, let us be grateful towards all the female characters who have made us worthy of seeing this beautiful world, who have showered us with love and affection in this precious life of ours, and who have accompanied us in every step of life as life partners.

And, let us make this Women’s Day a complete success by showing a commitment to always respect them, and to continue to do so ever after.