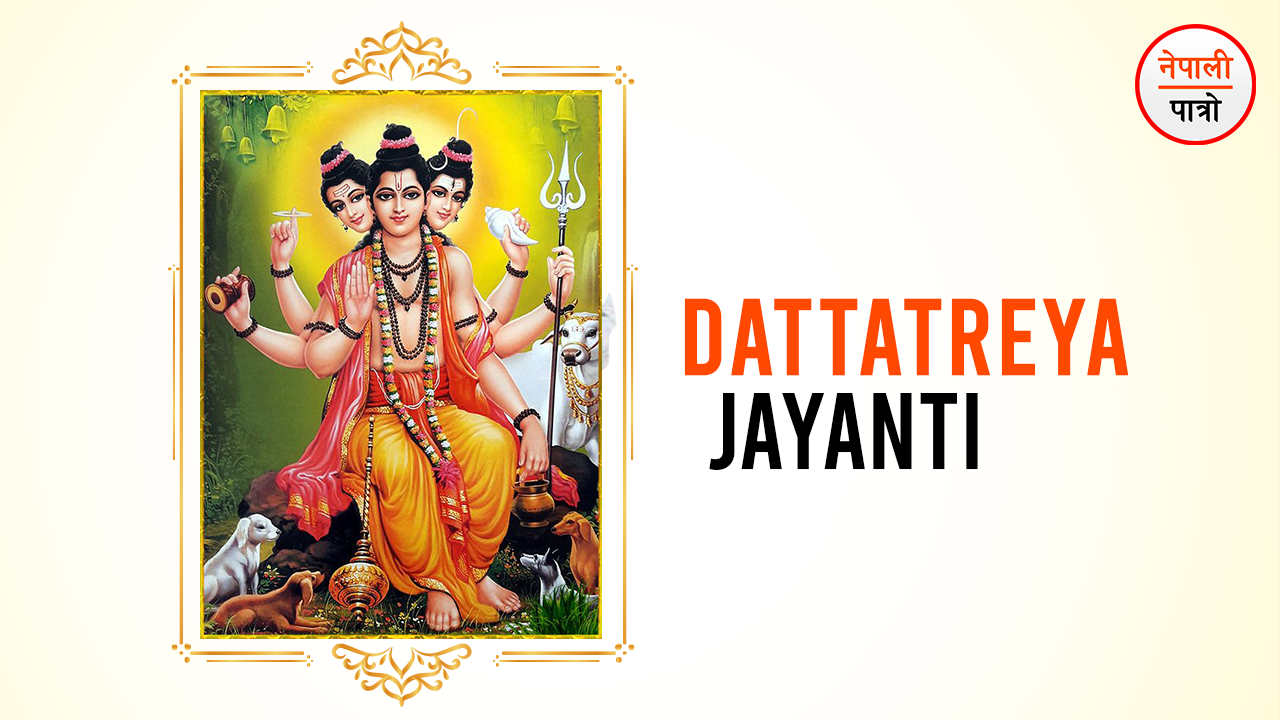 Dattatreya Jayanti. Today Chaturdashi Tithi of Marga Shuklapaksha (the 14th day of the month of the Nepali Bikram Sambat Calendar) is one of the very important day known as Dattatreya Jayanti. Dattatreya is considered an avatar of Lord Shiva Shankar by Shaivamargis (followers of Shiva/Mahadev) whereas Vaishnavas (Vishnu’s Followers consider and worship him as an avatar of Lord Vishnu/Bishnu. But generally speaking and as per popular Sanatan Hindu belief, Lord Dattatreya was born as a unified form of Tri-Dev i.e. Brahma (Universe or Creator), Vishnu (Sustainer/Protector), and Mahesh or Shiva Shankar/Mahadev (Destroyer) so as to blend the prevailing ideology of all three divinities.

Lord Dattatreya’s birth anniversary or Dattatreya Jayanti is celebrated on Chaturdashi Tithi of Marga Shukla Paksha. Although he is addressed by the name Dattatreya in the common language in Nepal, he is also known by the name Dattatraya. Although temples of Dattatreya are located in various places or parts of Nepal. But the magnificent temple of Bhaktapur is constructed in a Shikhar (shape of a mountain) style using woodwork as well as stone carvings providing a unique structure not to forget its beautiful blend of both wooden works as well as stone carvings. The temple is situated in a beautiful square in the eastern part of Bhaktapur which is popularly known as Dattatraya Chowk. It is considered to be one of the important temples and every day hundreds of people flock to visit and perform worship in the early morning.

As mentioned above, Dattatraya was born from parts of Brahma, Vishnu, and Mahesh. From the creator Brahma, he received Rajaguna Pradhan ‘Soma’, likewise from Bishnu/Vishnu’s part he received Sattvaguna Pradhan ‘Datta’, and from Shankar’s part received the Tamoguna Pradhan ‘Durvasa’ and in this way, Dattatraya was born with three main Gunas (attributes) as explained from Tridevas. After his birth, Lord Vishnu while giving a boon to Anusuya wife of Sage Atri/Aatreya said ‘Ahan Tubhyamayadatta’ (अहंन तुभ्यमयदत्त), hence the name of the child receiving some gunas/parts of Vishnu was started to be called as ‘Datta’. Similarly, due to his birth as the son of Atri Muni (sage Atri), he also received the title of ‘Atreya’ gotra which is also known as “Vanshopadhi-i.e descendant of Atreya Clan” or Atreya gotra in simple language. Thus his name ‘Dattatreya’ came into existence from the mixture or union of ‘Datta’ and ‘Atreya’. For this reason, i.e., because he was born from the parts of Brahma, Vishnu, and Mahesh, one can see the tri-divine form with three heads (faces), and six arms, depicted on his paintings, including statues dedicated to lord Dattatreya. In an incident described in the Skanda Puran, the supremely brilliant Dattatreya appeared with the influence when the divinity emanating/appearing from the Chakshu (third-eye/inner eye) of the great ascetic sage Atri’s meditative power and Mahasati Anasuya’s devotional power was condensed together.

Dattatreya’s lower, middle, and upper right and left hands respectively indicate/represents Brahma, Mahesh, and Vishnu as he is born as or in the form of Tri-Devas or also known as Trimurti. In his lower right hand, which is also considered to be the symbol of Sanskrit Mahavakya (great word) ‘अहं ब्रह्मास्मि” (Aham Brahmasmi), an Akshamala i.e. Japamala could be seen clearly. Similarly, the kamandalu (copper or bronze urn) in his lower left hand is considered to be the symbol of “प्रज्ञानं ब्रह्म” (Pragyan Brahma), Damru as the symbol of ‘तत्वमसि’ (Tatvamasi) is held in his mid right hand,  moreover, he is seen holding a Trishul (trident) as a symbol or indicator of ‘सुषुम्णायां स्थित: सर्वे’ ‘ॐ खंब्रह्म’ (Sushumnaya Sthit: Surve’). In his mid-right hand, a conch representing the symbol of ‘ॐ खंब्रह्म’ (Aum Khambramha’) can be visibly seen very clearly. Whereas, Sudarshan Chakra (a special and very strong disk-like metal weapon) normally or mostly seen in the hand of Bishnu can also be observed on Daatatray’s upper left hand that represents (अयमात्मा ब्रह्म) Ayamatma Brahma. His upper left hand, the symbol of ‘Ayamatma Brahma’, can be seen holding the Sudarshan Chakra in the hand of Shri Bishnu.

In a treatise written and titled an ‘Sarwaswa’, Dattatreya is also described as a spiritual mystery, moreover elaborating a lot about his saintly character. According to the text mentioned above, Dattatreya is described as a symbol of the Pranav (Omkar) form of the Trinity (Brahma, Vishnu, and Mahesh). Dattatreya’s three faces (heads) represent the three Matras (characters/nature) of Pranava (A,U,M=ॐ) and Ardhmatras (Half characters/nature) as well as the Abyaktawstha (unexpressed state) of Bindu (point-like character above a letters or alphabets i.e. half moon like character with a dot as in ॐ).  In an order to indicate the process of the extended form of Pranav, the cow as Vedamata Gayatri is shown standing next to him, while it is believed that the “पुरुषार्थ चतुष्टय” (Purushartha Chatushtaya)’ i.e. dharma (right path, virtuous way), artha (meaning), kama (action), and moksha (salvation/Nirwan) obtained by the practice of Gayatri is shown as their symbol around his feet in the form of four dogs.

दत्तात्रेयको शरीरका छ वटा हात पूर्ण ज्ञान, पूर्ण वैराग्य, पूर्ण यश, पूर्ण श्री, पूर्ण ऐश्वर्य र पूर्ण वीर्य (धर्म) लाई इंगित इङ्गित गर्दछ भने उनका दुइ खुट्टाले प्रेय तथा श्रेयको प्रतीकात्मक ढङ्गले अर्थ्याउन खोजेको हो। The six arms of Dattatreya’s body indicate full/absolute knowledge, full/absolute dispassion/apathy, full/absolute glory, complete/absolute luck, Absolute opulence and absolute religion while his two legs are representation of love and credit in the symbolic manner.  Even familiar as a Mahayogi, every Sananat Hindu believes him to be always present in every particle. Dattatreya, as per this belief is present even in the smallest particles like a grain of sand. He is well-known as a tri-divine form of eternal life, since this form is eternal, he has great love and compassion for all the devotees, who are simple and pure in spirit, with innocent child-like attitude and friendly behaviors,

Lord Dattatreya’s birth anniversary is celebrated magnificently in various places in Nepal including India during the month of Mangsir (Margashirsh). On the day of Dattatreya Jayanti, there is a huge crowd of devotees present at the Dattatreya temple in Bhaktapur. In Nepal, apart from this day, there is a mass of devotees in this temple also on the last Monday of the month of Shrawan. Apart from that, in this temple where Brahma, Vishnu, and Maheshwar all three gods are worshiped as one single form or Trishakti, there is a presence of devotees from early morning for puja and worship during other days also whole year round. In Nepali society, especially in Sanatan Hindu tradition, a popular belief among women is that if they visit Dattatreya’s temple or Lord Shiva’s temple on Mondays during Shrawan, their wishes will be fulfilled. Thus, the reason behind the mass devotees’ visiting this temple on Mondays during the month of Shrawan is because Shaivas (followers of shiva) consider Dattatreya as an incarnation of Lord Shiva, while Vaishnavas (followers of Bishnu) consider Dattatreya as an incarnation of Lord Vishnu.

Dattatreya is considered to be the first Guru (Spiritual Teacher) of the Guru lineage, Sadhak (seeker), Yogi, and Scientist. According to Sanatan Hindu belief, Dattatreya took knowledge of the power of Vyomayana (flying vehicles) aviation and also made great contributions to medical science as well.

Dattatreya is the foremost acharya (teacher) of the Navanath tradition of the Nath Sampradaya (community). Similarly, as per popular belief and tradition, he is also the founder and promoter of the Raseshwar Sampradaya. It is said that Lord Dattatreya resides near by a huge tree of Dumri (scientific name Ficus racemosa). Lord Dattatreya unified the Vedas and Tantra and created a single sect out of them.

In Dattrataya’s figure, idols, images, or simply photos that exist in various monasteries, temples, etc his uniqueness can be seen. Dattatreya expressed the idea that in human life, knowledge can be gained not only from the life or activities of animals but also from the qualities of people and objects. And according to this, he proposed that one can adopt as many qualities as one desires and use them, And for Dattaraya, everything was like a guru as he expressed the idea that those people and things are quality providers and one can take virtues and other things from a person, or animals who provide virtues and they are to be taken plus regarded as one’s guru as they are virtue providers, therefore for Datrratraya everything was a guru.

Dattatreya regarded as a figure who embodies both God and Guru, therefore he is considered as ‘Parabrahmamurthy Sadguru’ (परब्रह्ममूर्ति सद्गुरु) and ‘Shri Gurudevdatta’ (श्रीगुरुदेवदत्त). Inside guru tradition, he is considered to be Adi -Guru (आदिगुरु), seeker (साधक), yogi, and scientist as well. As mentioned in the Purans, Dattatreya gave Parasuram (one of the incarnations of Bishnu) a mantra (special spell) called Srividya. Similarly, he gave many teachings to Lord Shiva’s son Kartikeya, and also gave Pralhad the ability to become a great king by teaching him Anaashakti (अनाशक्ति) Yoga. Also due to his devotion to Lord Dattatreya, Guru Gorakhnath attained the path of Chaturanga (चतुरङ्ग) Yoga by performing asana, pranayama, mudra, and samadhi.

It is customary to recite a text known as ‘Gurucharitra’ (गुरुचरित्र) on the occasion of Dattatreya Jayanti. Let us all try to achieve freedom from anger, and strive for the welfare of all beings. Let us all develop a firm understanding of (ब्रह्मज्ञान) Brahma Gyan (complete knowledge) and patience from today onwards. Let us celebrate Guru Dattatreya Jayanti with grandeur and great zeal.

We at Nepali Patro, today, on this holy Dattatreya Jayanti occasion, would like to heartily extend our warmest and heartily wishes to all our users, readers, and every Nepali, Sanatan Hindu follower here in Nepal or living abroad. Dattatreya Jayanti