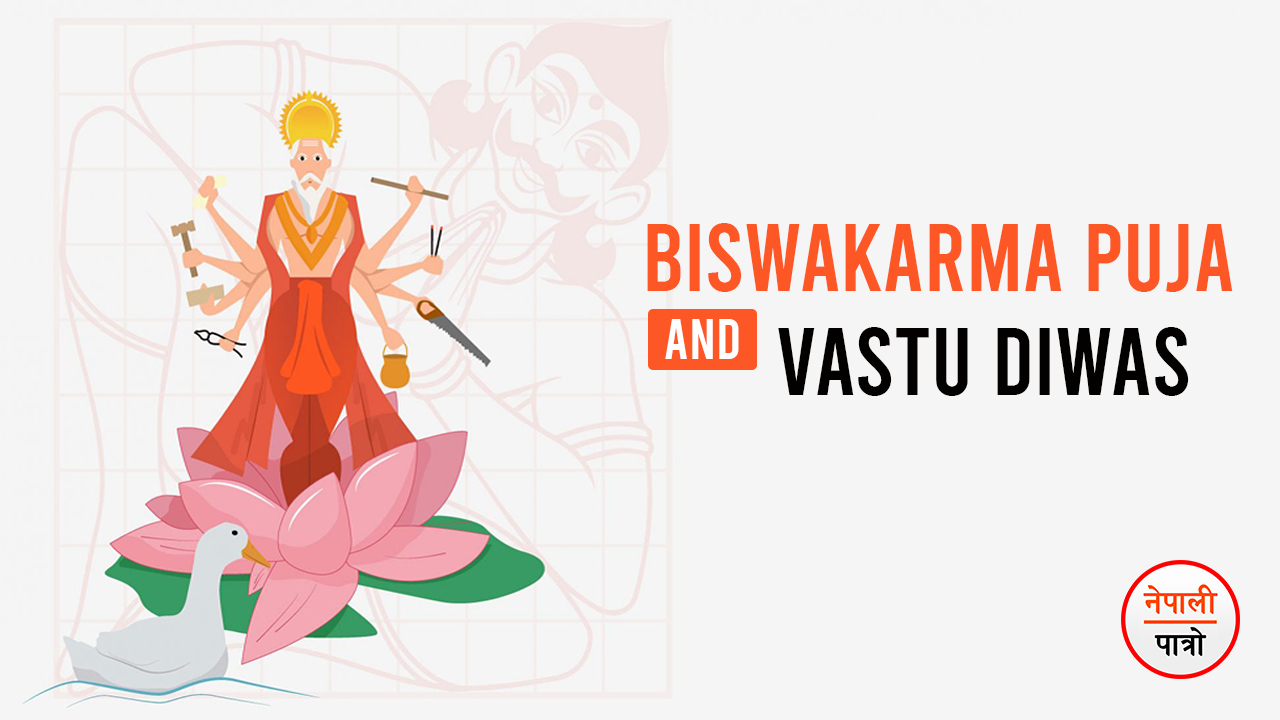 Bishwakarma Puja and Bastu Diwas. The worship of Lord Bishwakarma, the creator of the three worlds, Heaven, Death (Middle World), and Patal Lok, is celebrated at the end of the rainy season and the beginning of autumn. According to astronomy, Suryadev (sun) enters Virgo (Kanya Rashi) on the day of Biswakarma Puja, which is celebrated on the 1st of Asoj. The importance of Lord Bishwakarma is described in the Rig Veda by writing 11 hymns dedicated to him. Today, the first of Ashwin, the sixth month of the Hindu solar calendar is also known as Aswin Sankranti or Kanya Sankranti. In some places, this day is also called Bishwakarma Jayanti.

According to a well-known Hindu Traditional belief, in ancient times, Lord Bishwakarma built magnificent palaces for the gods along with arms, weapons, and thrones, etc. He made a trident for Lord Shiva, Sudarshan-chakra for Lord Bishnu, a thunderbolt for Swargaraj Indra, and a KalDanda for Yamaraj the god of death. It is said that he made all these things using the dust of the sun. Similarly, Hindu scriptures also mention that Ravana’s Lanka was built by him as well as Dwarika for Sri Krishna and Indra Prastha for the five Pandavas.

Bishwakarma Puja Festival celebration is celebrated today on the day of Kanya Sankranti, including on the day of Kartik Shukla Pratipada (Govardhan Pooja) as well. In Nepal, on the occasion of Dashain, on the day of Mahanavami, i.e. Kalaratri, Biswakarma puja is performed by worshipping weapons, machines, vehicles, and tools of the house by sprinkling blood drops from the animal sacrifice.

In the scriptures and Puranas, Lord Bishwakarma is considered to be the god of architectural instruments as well as other instruments. Therefore, it is a custom today to celebrate Bishwakarma Puja in Nepal and in India as well. Whereas there is no custom of animal sacrifice in today’s Bishwakarma puja, as done during the Mahanawami. Hindus worship Bishwakarma today especially in industrial areas including mills, iron goods shops, vehicle shops, and machinery repair workshops. Today, machines are cleaned, painted, and then they are worshiped. Most of these factories etc. are closed today due to the belief that tools and machines should not be used during this day.

This day is also celebrated by architects as Bastu/Vastu Day/Diwas. This puja and worship can also be seen as an important day for productivity growth and national prosperity.

Since Lord Bishwakarma is a special knower of architectural knowledge, if one worships him and respects his erudition or intellect, there is a belief that one will also attain that quality. Lord Bishwakarma is known as the god who invented craftsmanship and engineering. On this day, it is customary to take a bath in the morning, purify oneself, and worship one’s tools along with factories, etc by chanting the Biswakarma mantra. During the puja process, the idol or picture of Lord Bishwakarma should be placed in the place of worship and a yellow or white flower garland should be offered and incense should be lit including an oil lamp.

During the puja, one should take a flower and some akshata in his right hand and recite the mantra given below. After reciting the mantra, flowers, and akchyata should be left in the water. As the method of worship, various instruments, and tools, etc. should be worshipped offering water, akchyata, flowers, sweets, and hawan (fire worship) should / can also be done.

Following is the mantra that can be recited while worshiping the god of architecture lord Biswakarma.

There is a religious belief that if one can please God Bishwakarma by worshiping him, the mechanical devices will not break down and it will not cause any pain to the user. In this way, after chanting the mantra and performing the puja, Biswakarma Puja can be concluded by distributing available offerings (prasad) to all those present at the puja celebration. Worship and puja methods may vary depending on the place of worship and/or the person leading the worship or puja. To Read this article in the Nepali Language please click here.