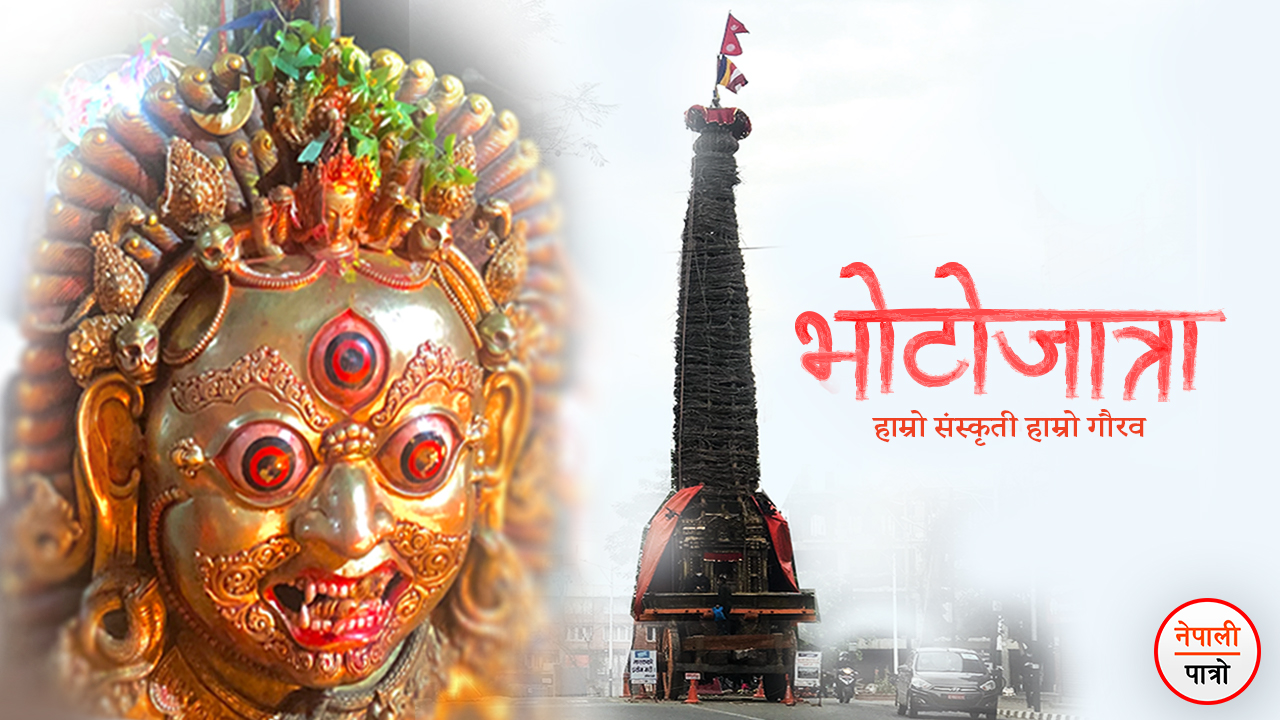 According to the Historical Legends Nagaraj Karkotak of Tau-Daha had given the farmer physician a vest (the bhoto) with different precious stones who cured the eye disease of his wife Nagini. One day, the physician, who had gone out to dig and work in the field, put his bhoto (the vest) in the field and started working. In the evening as he could not find his bhoto, he was sadly returning home. At that time, the Jatra/ festival of Rato Machhindranath was going on in the city. With the hope to find his bhoto, he went inside the crowd looking around. The farmer saw a demon wearing his bhoto and he asked him to return it. The demon denied to give it back. Both of them started to argue and were trying to get the bhoto for themselves.

After their clash in the crowd, both were brought before the king. The king also was not able to decide whose bhoto it was because of a lack of evidence. He told them to come with a witness or evidence until then it will be in the possession of Machindranath. Then the king showed the bhoto three times to all, deciding to give it to the one who comes with the proper evidence. Since then, the Bhoto Jatra is held every year at the same place where the physician and demon debated about the bhoto in Jawalakhel, Lalitpur.

Each year on the day of Baisakh Sukla Pratipada, Machindranath is put on the chariot and after a Gaudan (donating a cow) on Aschyaya Tritiya, an offering for peace and relaxation of Machindranth is held. The next day, namely from Chaturthi Tithi onwards the chariot of Shri Karunamaya, Rato Macchindranath starts the procession around Lalitpur. The procession of the chariot starts from Pulchowk and it is customary to pass through Ga-Bahal, Sundhara, and Lagankhel and arrive at Jawalakhel to close off the ceremony by demonstrating the bhoto to the public.

The chariot procession is done so that the town people can have a darshan (sight) and receive the blessings of their patron god Shri Padma Pani Avalokiteshwor. There is a popular belief that watching Rato Machindranath and the vest with gems, and ruby with precious stones helps in achieving the desired fruit as well as releasing anxiety and finding peace. The chariot is pulled from Thathi Tol an auspicious time given by the astrologer to reach Jawlakhel and on the fourth day of arriving there the bhoto is shown from the tower of the chariot, but there is no exact date or Tithi of finalizing the procession.

After the conclusion of the Bhoto Jatra ceremony the chariot procession (Rath Yatra) of Rato Machindranath too concludes. After that, according to the traditions the idol of Lord Machindranath is taken out of the chariot, is taken to temple located at Bungmati for six months in a traditional handcrafted bed accompanied by traditional music.  To Read this article in the Nepali Language please click here.