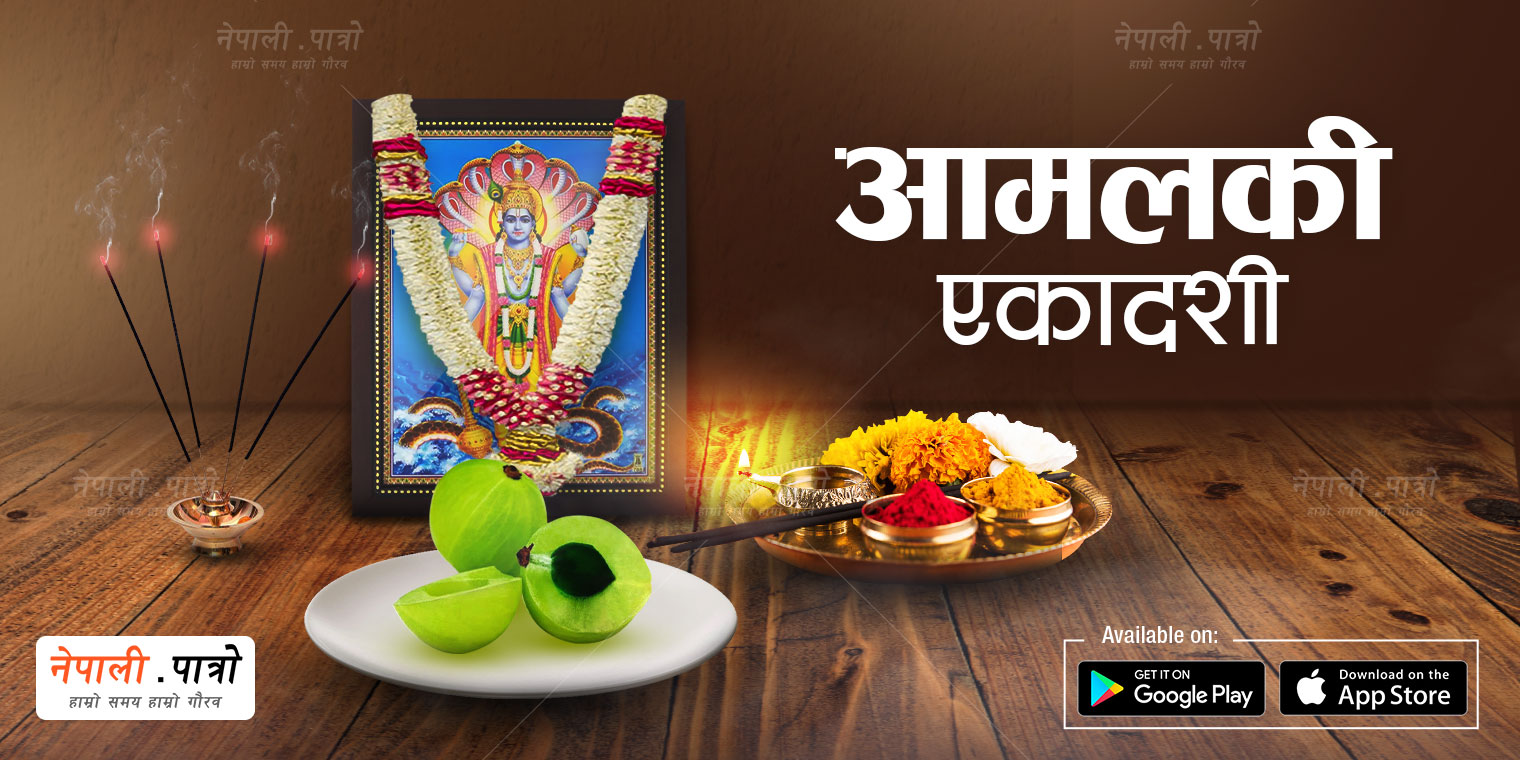 The Ekadashi date of the month of Falgun Shukla Pakchya is called Aamlaki Ekadashi. There is a mythological context mentioned in the Vrataraj / Bratraj Granth scripture that elaborate the importance of this Ekadashi. The glory of this Ekadashi fast is explained through the dialogue between the King Mandhata and Rishi Vashishta / Bashishta. When the king Mandhata asked sage Bashishta to give a sermon about the best fast, the sage suggested, to observe the fast of Aamlaki Ekadashi. The sage told his words that this fast is a complete antidote to all kinds of sins and is as fruitful as donating thousand cows and is also the most liberating one. The sage also told the king that this fast would bring complete fulfillment.

Sage Vashishta / Bashishta, while calming down king Mandhata’s curiosity, also told the story of the violent hunter. Once upon a time, there was a king named Chandravanshi Chitrarath in a town called Baidish. Everyone in the kingdom was religious, and no one was sad or in misery. Everyone used to fast, observe and worship Ekadashi methodically. They used to bathe during Ekadashi and worship God Narayan, also listen to stories about Narayan and chant Harikirtan (religious songs about Lord Hari).

King Chitrarath, who knew the special glory of Aamlaki Ekadashi, went to the river with all his people on the day of Aamlaki Ekadashi and all of them took a resolute bath. And, they returned back to the temple, installed a kalash (copper vessel like an urn) and started worshiping the idol of Parshuram methodically. They also worshiped Amla (gooseberry) and by offering umbrella, shoes, etc. to the Lord performed an arati as well. The king along with his people worshiped Parshuram and Amla in the same way and prayed: —

In this way, while the king along with his people were staying awake at night after worshiping, praying and offering alms, a hunter, suffering from hunger and thirst, arrived there. After watching the worship, people staying awake, idols of God, etc, the hunter was amazed plus inspired by the devotees and their devotion, he also remained awake like others in the same way. At dawn, after performing their daily deeds, worshiping the established deities and concluding the ceremony everyone went to their respective homes. The hunter also went home and after eating rested. After a few days, the hunter died. Due to the merit of fasting unknowingly, enduring hunger on Aamlaki Ekadashi and staying awake at night, the hunter was reborn in the royal clan of Jayanti Nagar and became a great king named Vidurath.

Like this, because of the influence of Aamlaki Ekadashi, a hunter became a mighty king. The son of Vidurath, Vasurath also became a mighty and courageous king. Vasurath was an exclusive devotee of Lord Bishnu and was very virtuous. He also performed various fire worships as Yagyas as well. The same king Vasurath, one day on his way to hunting in the forest lost his way inside there and was stranded. At that time, he had enmity with the barbarian outcast hill tribes. Thus, they have been waiting for the opportunity to take revenge with King Vasurath. So, when they found the king alone, starving, and thirsty, they surrounded him and attacked. They started attacking the king with different kinds of spears, tridents including other weapons. But to their amazement, the weapon just touched the king and fell to the ground, unable to harm the king in any conceivable way. The hill tribe people’s weapons ran out of stock. After all their attempts failed, the hill tribe people themselves were frightened.

When the frightened hill tribe took a glance at the king, a very beautiful woman appeared from his body. And, this goddess waged a war against the barbarian hill tribe and destroyed them in an instant. The king was very much surprised to see this act of his enemy being destroyed when just a few moments ago he had fallen into their trap. At that same moment, a loud sound was heard from the sky saying that “there is no other refugee except lord Keshav. Therefore, his refuge is the welfare of all the being”.

King Vasurath was surprised after hearing this sound. He lived for a long time with the happiness of his royal palace. In this way, those who listen to the story told by sage Bashishta to King Mandhata and observe the Aamlaki Ekadashi with their pure heart, will get rid of all their fears and get the refuge of Lord Narayana in Baikuntha Lok after death. This Aamlaki Ekadashi is also called Rangbhari Ekadashi as it falls 3-4 days before Holi festival. The colors of Holi are offered to various deities in this Ekadashi, and the remaining colors are used to play during Holi festival. This Ekadashi is also called Rangbhari Ekadashi as it is the beginning of the festival of colors. To Read this article in the Nepali Language please click here.